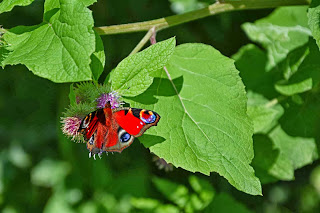 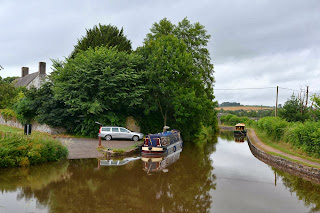 This was not my first visit to Pen y Fan, I visited the Brecon Beacons when I was 15 and climbed the mountain then, I remember it well, it was very hot and very sunny, today however was going to be quite a different climb. The Pencelli Castle campsite where I was staying was about 7 miles away from the top of Pen y Fan so I decided to walk all the way, I left the campsite around 10am and headed out of the village and past the Monmouthshire and Brecon canal.

After passing through the very quiet village of Llanfrynach I left the road for the first time and headed cross country along some footpaths and down by the side of a river, up until now it had been very dry but the rain started to fall and so I got the waterproofs out and carried on. After following the river for some time I veered off and headed across some fields, apart from passing the occasional farm worker I saw no one, it was very quiet and rather nice to have such peace and quiet, its not often we experience that in this modern world we live in. Eventually I walked through a farm and I was back on the road for the next mile or so. 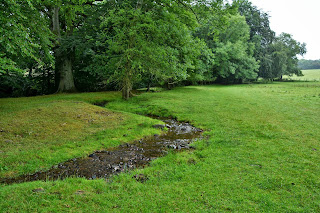 The road zig-zagged its way through the fields and over rivers (and waterfalls) and I soon turned left down a smaller road finally heading towards the mountains. The path ahead was clearly marked on my map, a nice straight pathway leading to the edge of the Brecon Beacons national park, easy I thought, however when I reached this path I found it was badly over grown, I couldn't see very far along the path and I didnt really know what to do, if turned back it would add a mile or more onto my walk, if I carried on there was no guarantee I could find my way along the path. 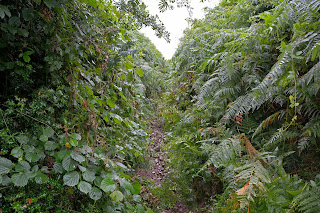 I decided to try the path, the rain had stopped and I was after adventure so I headed along the path. I had managed up until this point to stay relatively dry from the rain but after about 2 minutes of walking along this path I was soaked, the ferns on each side of me were wet and I was getting wet from the plants above and below, not only was I trying to avoid getting too wet but I was trying to avoid the stinging nettles, thorns, bramble and almost every other type of attacking weed you can think of.

It took me about 30 minutes to navigate this path, by the time I had reached the end I was soaking wet, scratched and stung on my legs, also I was worn out from climbing my way through the undergrowth, it was a bit like working my way through a jungle and think I could have done with a machete. I had finally reached the gate onto the Brecon beacons national park so I stopped for a few minutes and had a bit of tea from my flask, changed some of my clothes for dry ones and headed through the gate and up the first major slopes towards the top of my first mountain of the day.

The climb upwards started almost immediately, there were a few sheep around and the path worked its way up, the cloud was thick above me and the rain was back again along with the wind, I could tell I was getting higher. Very soon the path had taken me up into the clouds and the visibility was down to about 50ft. There were a couple of people heading in the same direction so I walked along with them for a while and kept them in sight, After about 30/45 mins climbing the path suddenly took a change in direction, not to the left or right but vertically, it had been a steady climb so far but suddenly it changed to a very steep climb, I was having to clamber over boulders and work my way up steep steps.

I eventually reached the top of this first mountain, this was Cribyn, a typical looking mountain with a pointy top, at 795 mts high is was not my final high point but it was still excellent to get to the top, The wind here was really strong so I didn't stop, I carried on to my next mountain and highest point. The Path from the top of Cribyn went back downhill immediately but not for too long, it soon became a flat path for a short while and after crossing a small marshy area it started to head uphill again. The path weaved its way around large boulders but it was not as steep as the path up to the top of Cribyn, it was still a tough climb though, It was along this path I passed 3 other people going in the other direction, these were the only 3 people I saw on the slopes on Pen y Fan.

I soon reached the summit of Pen y Fan, it is 886 meters high and the weather was crazy at the top, the wind was so strong and it was mixed with rain so I took a couple of photos and then managed to find a sheltered corner among some boulders where I could have a cup of tea and a bite to eat. I didn't stay at the top long as the weather really was horrible so I headed back down the slopes of Pen-y Fan along a path that would take me back down without having to climb Cribyn again. 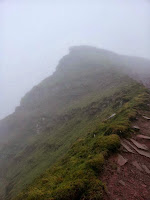 The path from the top of Pen y Fan took me along the top of some pretty cool ridges, sadly I couldn't see too much as the cloud was obscuring my view, it was not too long before I was back down out of the bad weather. I worked my way back down the path over a few more hills and past the sheep and around the edge of a final hill, finally coming out of the National park and back into the farm land and countryside of Wales.

After leaving the national park I headed through a farm and along a few roads and then I was back on the same roads I used earlier in the day, all I needed to do was retrace my steps back to the campsite and back to a nice hot shower, dry clothes and a lovely barbeque and relax.

This climb was amazing, I couldn't see much of Pen-y-Fan but it was still an awesome climb and one I will remember for a long time.
Posted by Magirob at 04:33 No comments: