My first highpoints of 2014 were not going to be a great challenge, I had spent a couple of days at an event in Bishops Stortford and wanted to do something on the way home so I traveled clockwise around the M25 to do the high points of Thurrock and Southend on Sea.

The first stop was the highpoint of Thurrock, there was a handy car park right next to where the highest point was so there was no need to do any climbing (or walking), there was a church here and a few houses, not too far away there was a communications aerial but that was about all. I soon headed off to my next high point but not before making a quick visit to a friend on route. 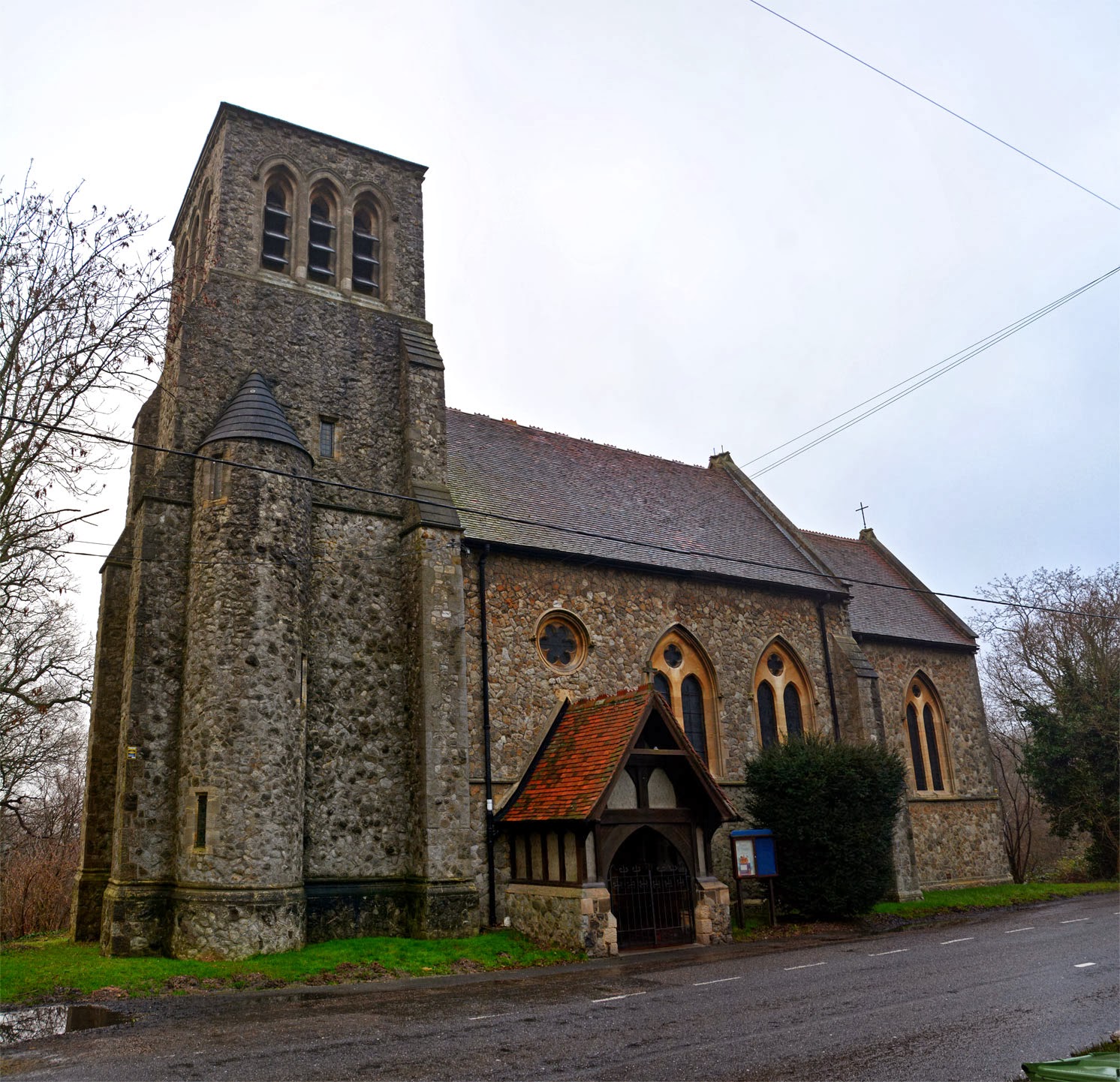 Roger Daws is a balloon artist and an adventurer, he climbs mountains, hills and rock faces all over the place, I had seen him at the event in Bishops Stortfort and he invited me to pop in for a cup of tea, after this I was soon on my way to visit my second highpoint of the day, This one was the high point of Southend-on-Sea. What can I say about this high point? let me think about how to put this, its was very . . . . flat, yes flat is the word I am looking for, not only for geographical features but for interest too.  The high point was situated within a clump of trees at the end of a residential road, I was lucky to have the official high point pinpointed onto Google maps so that I could use my mobile to find the exact location, it really was flat and about as exciting as watching paint grow (or grass dry?). 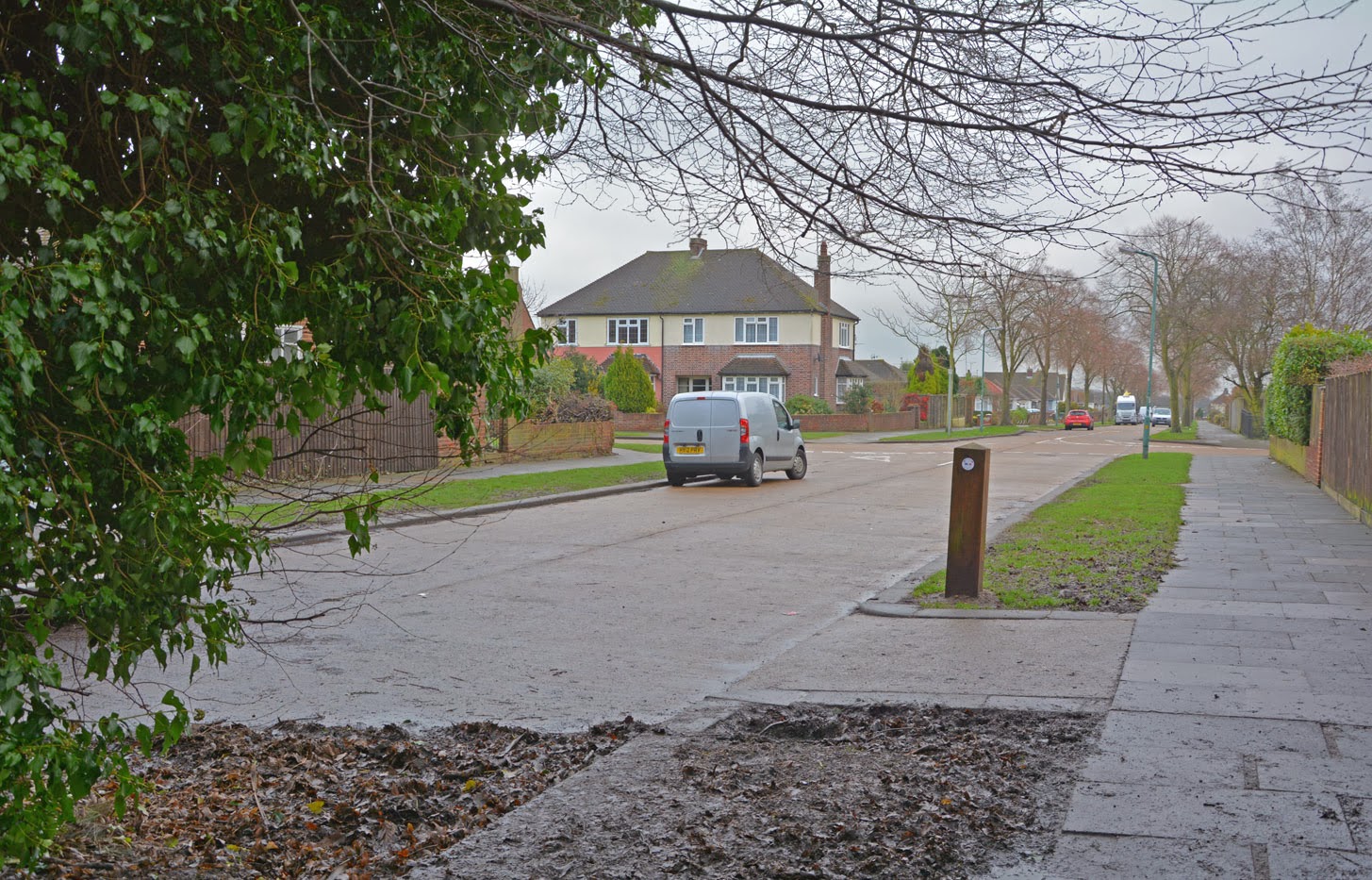 Once I had climbed (walked across to) the high point it was time I headed off home, I was soon back on the M25 and over the Dartford crossing, then it was not too long before I was back home after those 2 exhausting climbs (not). 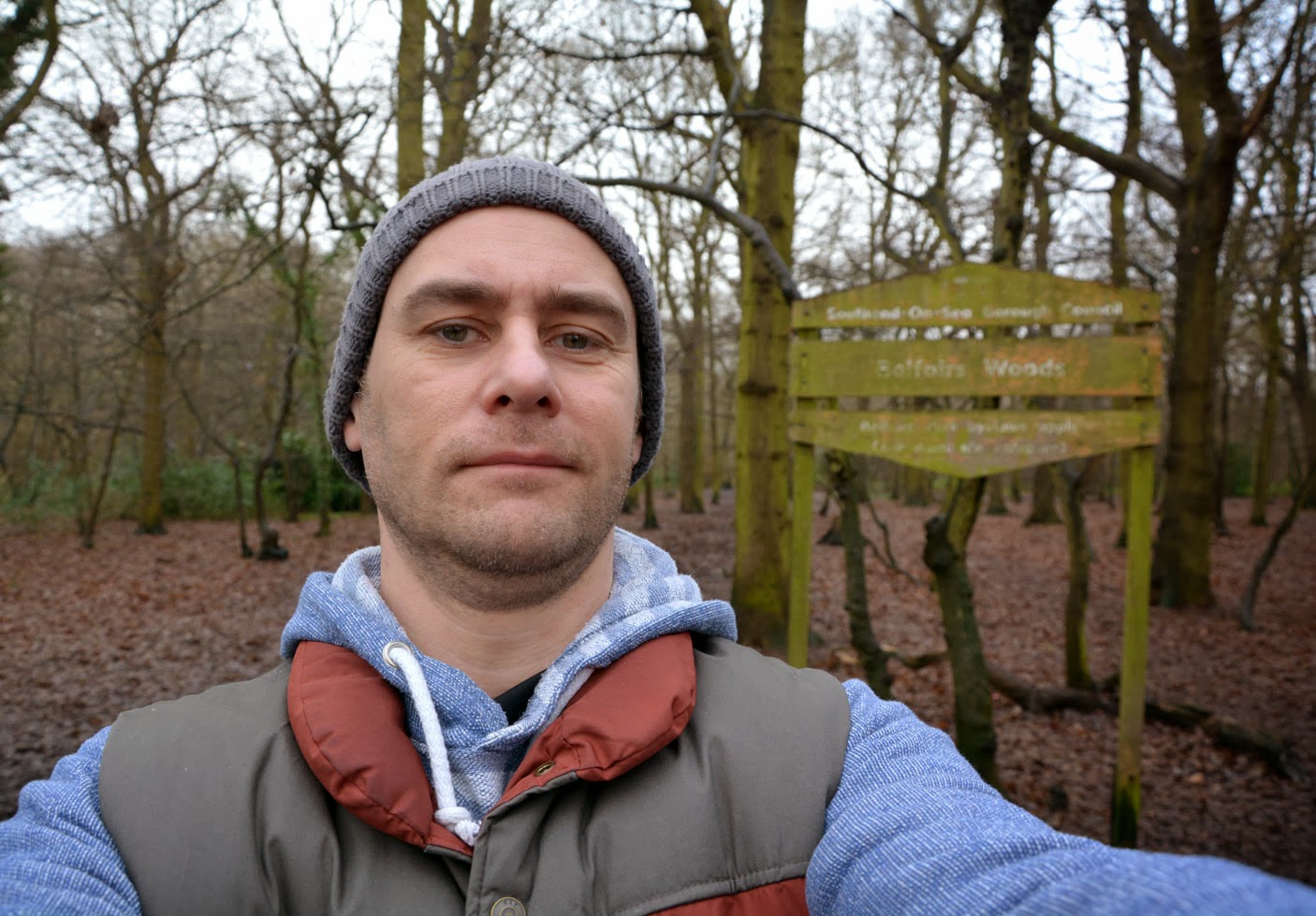 Back in September 2013 I met up with friends Chris and Johnny for a meal, the subject of camping came up and Chris and I decided to plan a camping trip away, The date was set in Early November and the location was chosen, all we had to do was hope for good weather. November arrived and all I can say is that it was the start of one of the wettest winters I have ever known, I was due to pick up Chris in Bournemouth so I headed off along the M27 and arrived at Chris's house when he arrived home from work. Chris soon packed up all his stuff and we loaded the van up and headed off to Somerset. It took us a few hours to drive there and we arrived after 10pm, When we left Bournemouth it was pretty dry but the closer we got to our destination the wetter it got, Heavy rain was not going to stop us, we found a suitable pitch at the campsite in the Exmoor National park and set up the tent.

The next morning we woke up to a fairly bright morning, Chris kindly cooked breakfast and we got ourselves ready for our climb. We left the campsite and drove the short distance to the local village of Exford where we parked and set off on our walk. We soon left the village and headed north up some country lanes, it was not raining but it was very wet on the roads with streams and puddles everywhere. 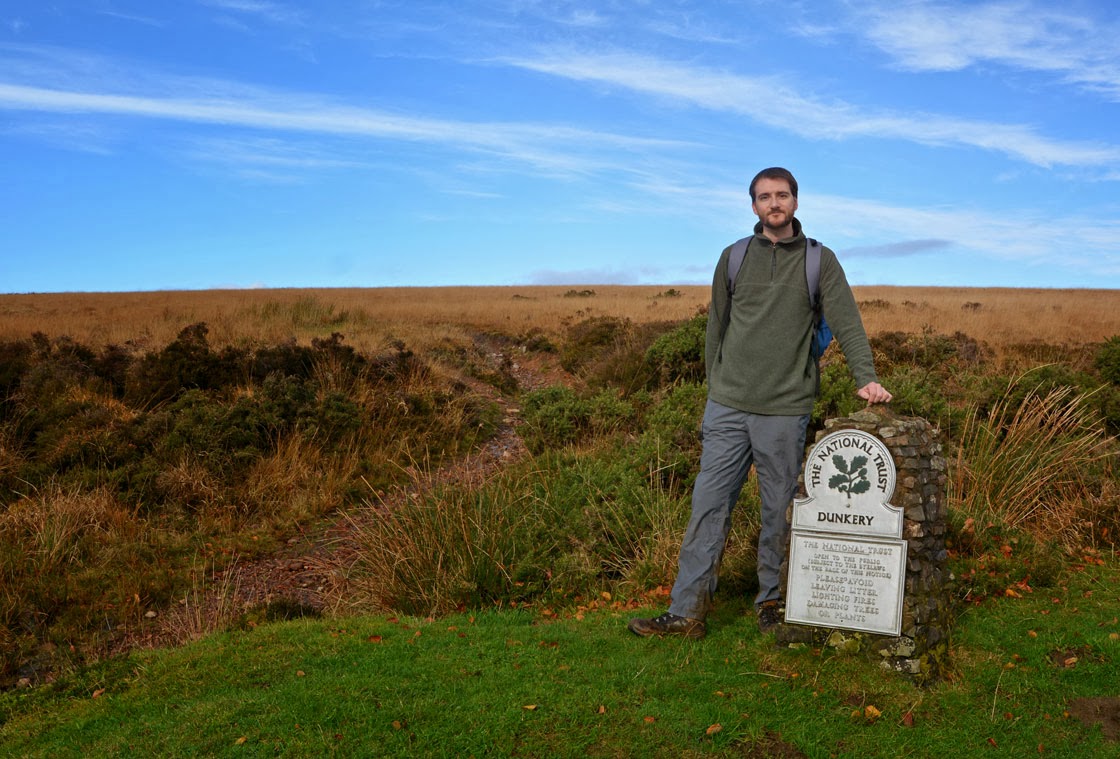 We continued further along the road and then through a few fields with sheep for company, then we did a zig zag and were back on another road for a short distance. We soon left the road and were back on a path heading along the side of a hill, the views south were pretty good but we had still not seen our destination yet, It was not long before we saw the distinctive shape of Dunkery beacon ahead of us. 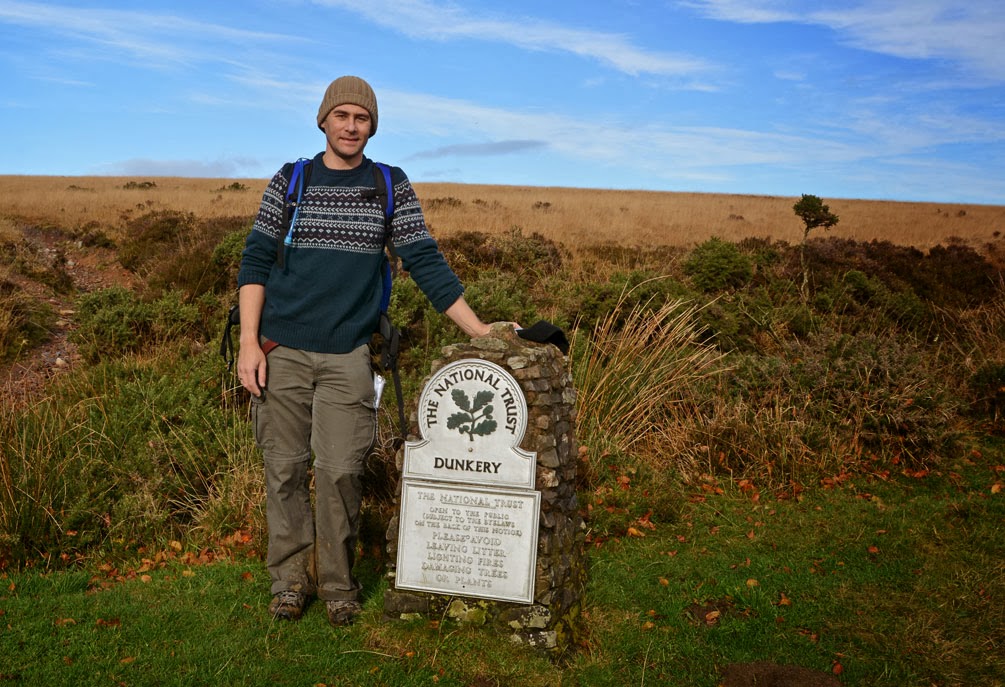 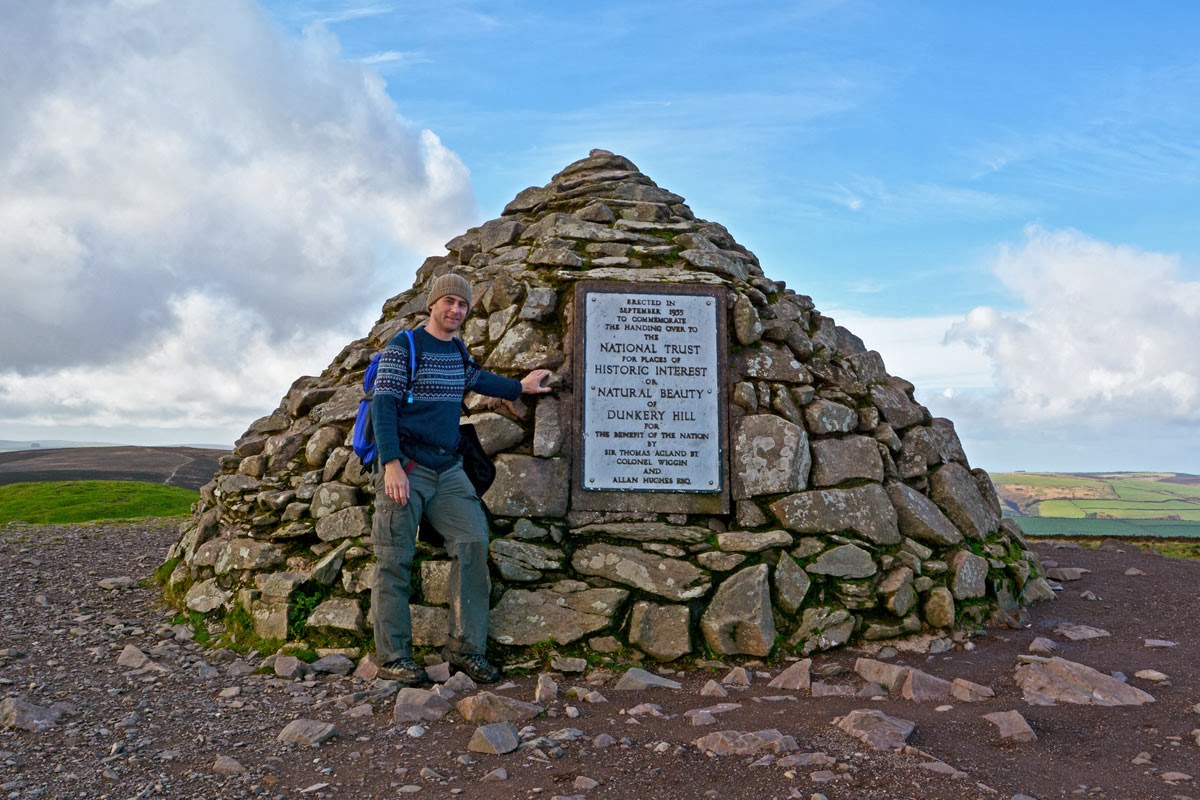 We reached the top of the beacon and spend some time taking photos, we both climbed the huge mound of stones on top and then we found shelter for some lunch. While we were eating I set my camera up for a couple of time lapses, the wind was pretty strong and the clouds were whizzing past, we had an amazing view across the Bristol channel and we could see the south coast of Wales easily, also along the coast to Minehead. We finished our lunch and then a huge black cloud appeared above us, we decided it was time to get moving. 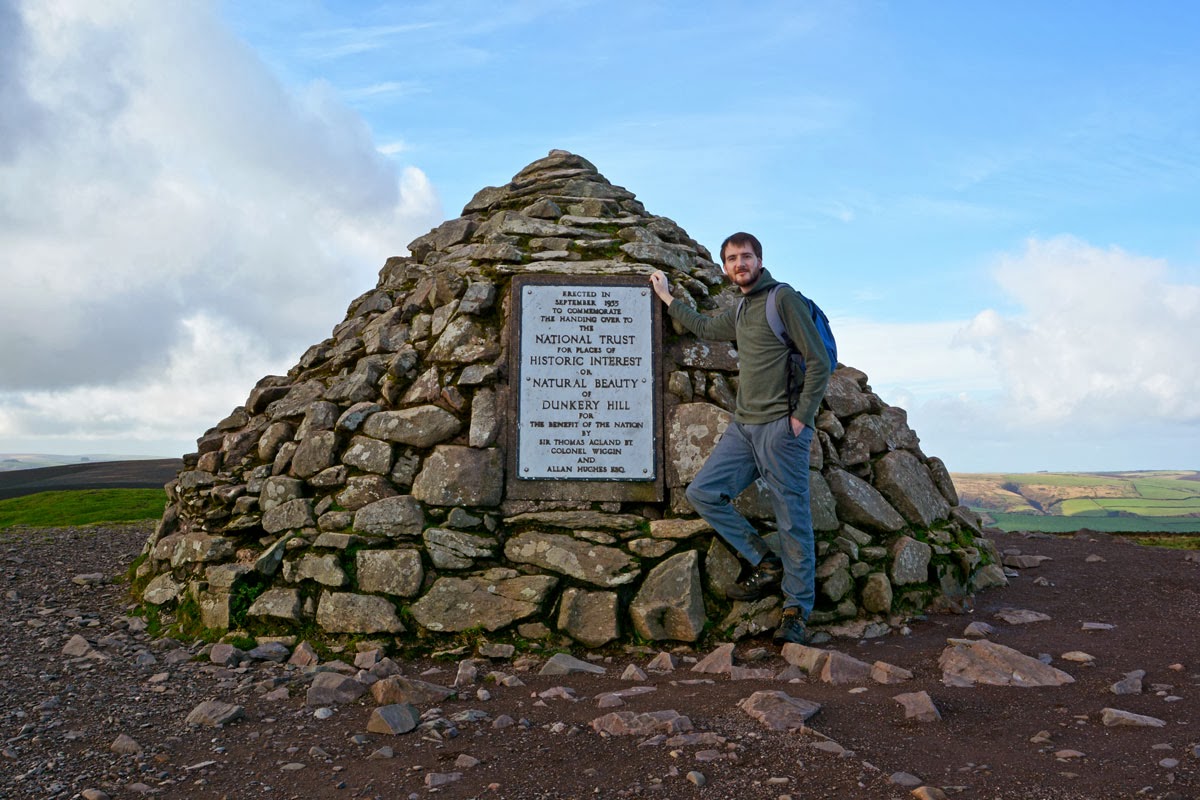 We set off again and passed the stone mound on top of Dunkery beacon and we were soon blown back to shelter behind the stone mound. the wind was much stronger and freezing cold and now the rain had started. we chatted for a moment about what to do and we decided to face the wind and rain and get moving. The wind was right in our faces but once we had climbed down the slopes of the beacon it dies down a little.

The route back took us along the same path and road but then we chose to end up walking a slightly different route, walking down a track and through a gate we were soon amongst the sheep and heather again, eventually we turned off the track and found ourselves walking through a few fields, past an old derelict farm building and then down to a small river. I say it was a small river but it was pretty swollen from all the rain and there was no bridge in sight and no stepping stones so it was a case of making a massive jump across the gap, we both made it. 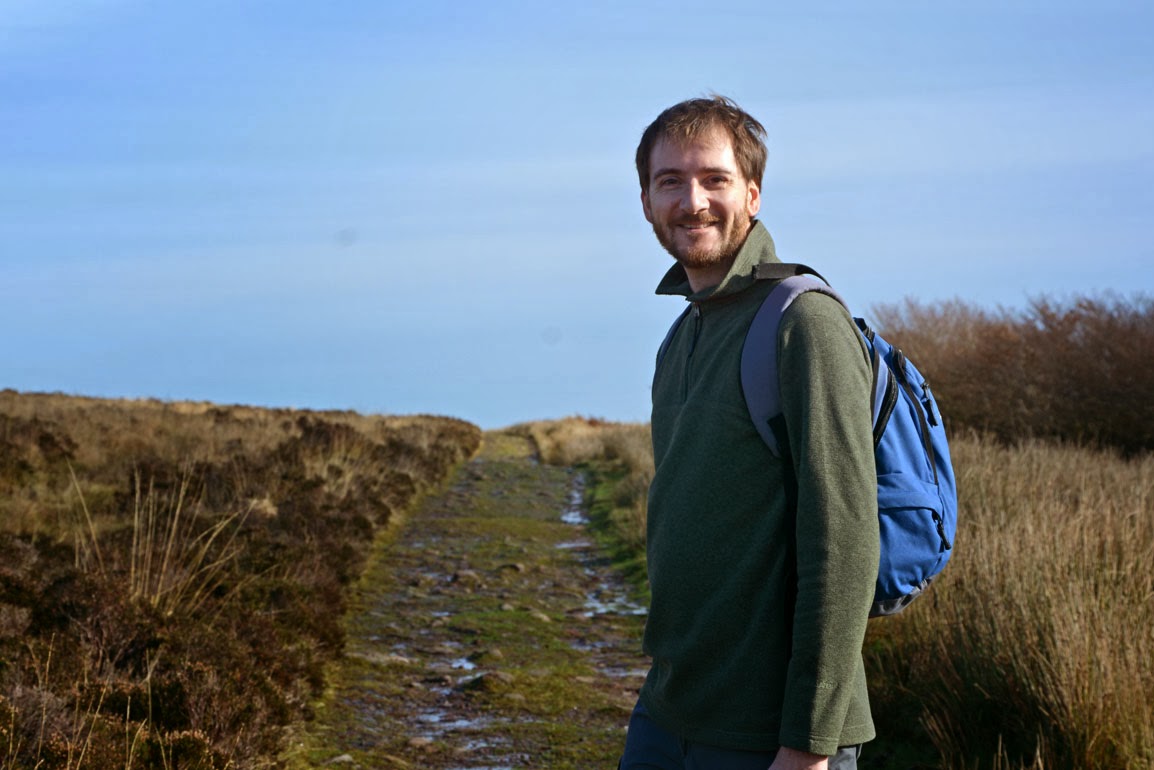 The last part of our walk took us past a few houses, across a field and finally back into the village and back to the carpark. We had walked 9 miles and we were ready for a warm shower and bite to eat so we headed back to the campsite. after our shower and a change into warm dry clothes we headed back into the Exford for dinner, we had a lovely meal of Lamb and it was nice to see TVs Nick Hewer (I am sure it WAS him).

The next morning we packed up the tent and headed off home, it was an awesome climb and it was great to have some lovely company with Chris, I look forward to climbing another hill with Chris in the future. 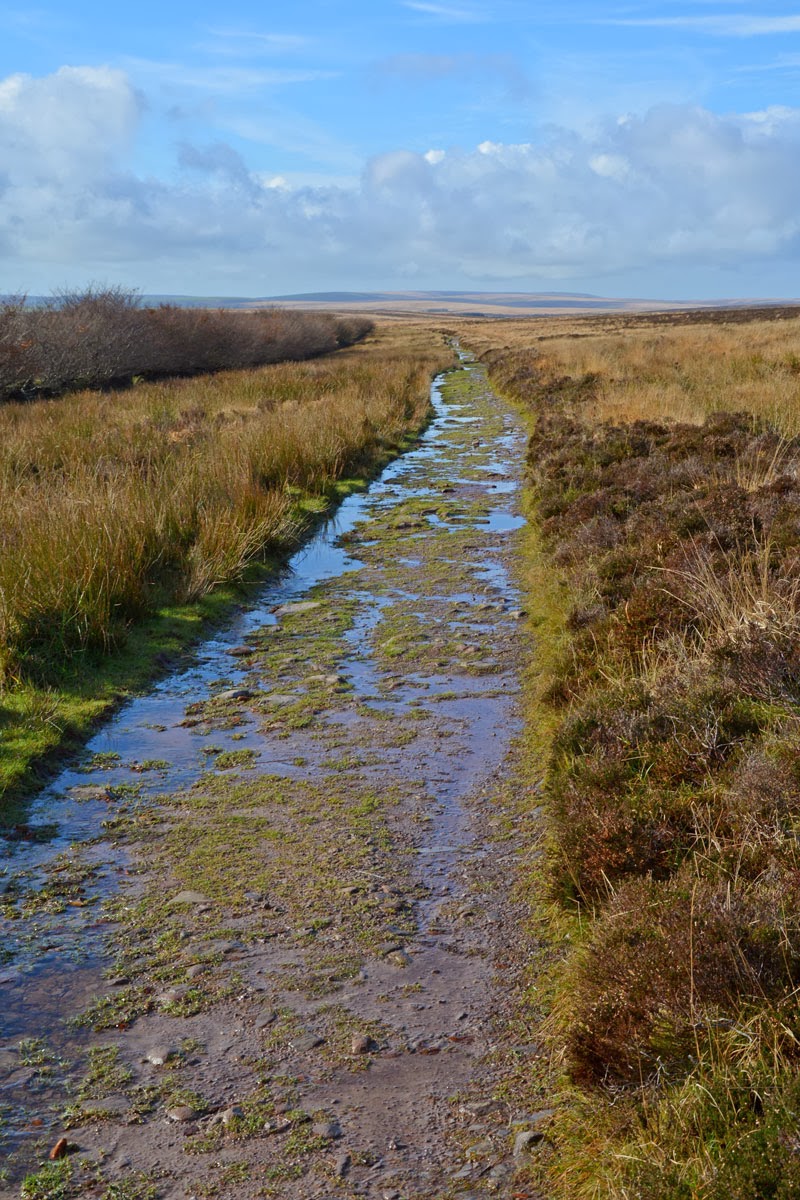 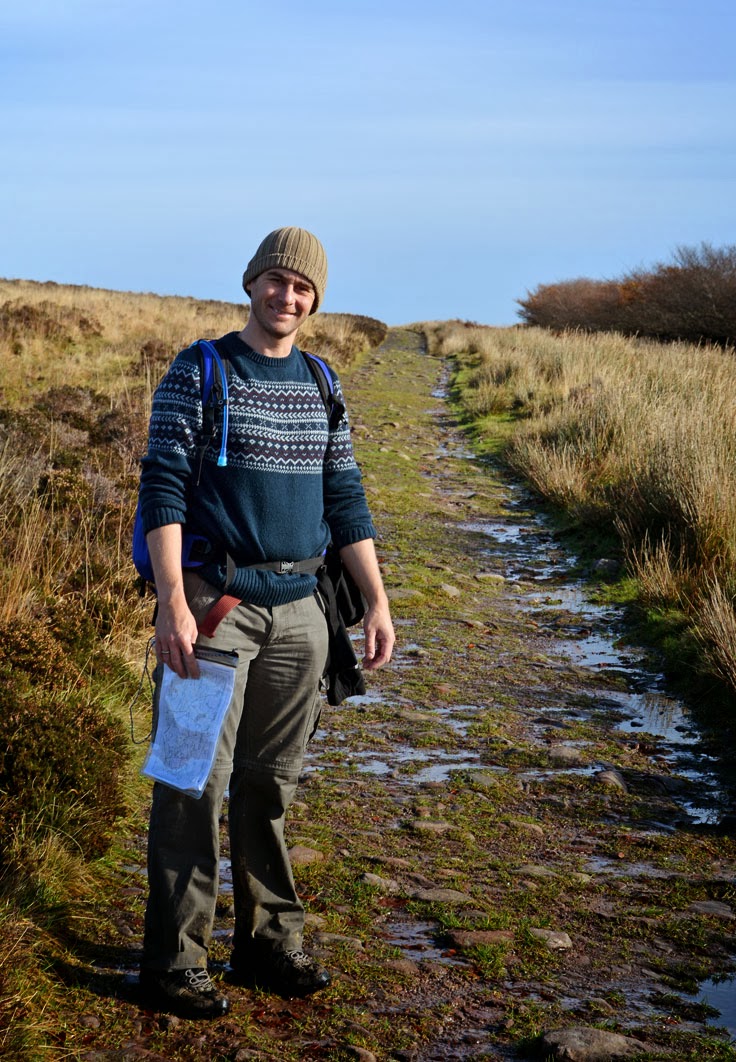 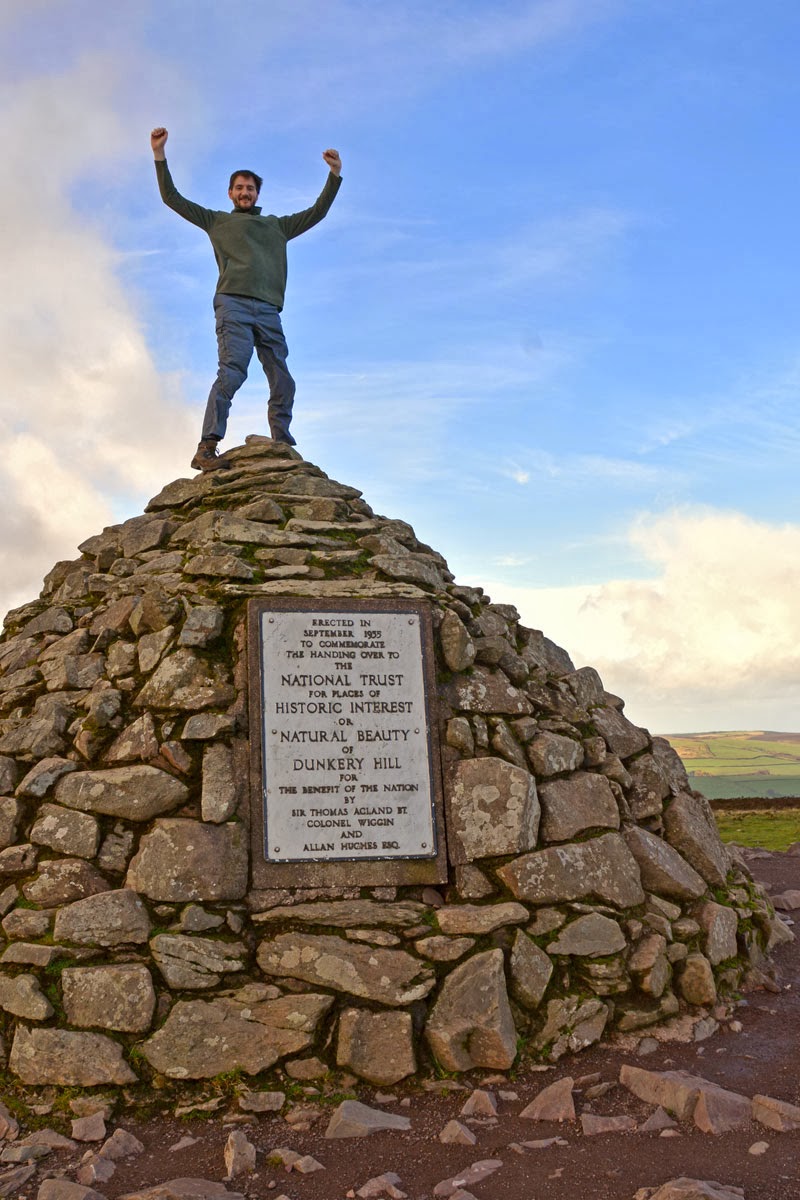 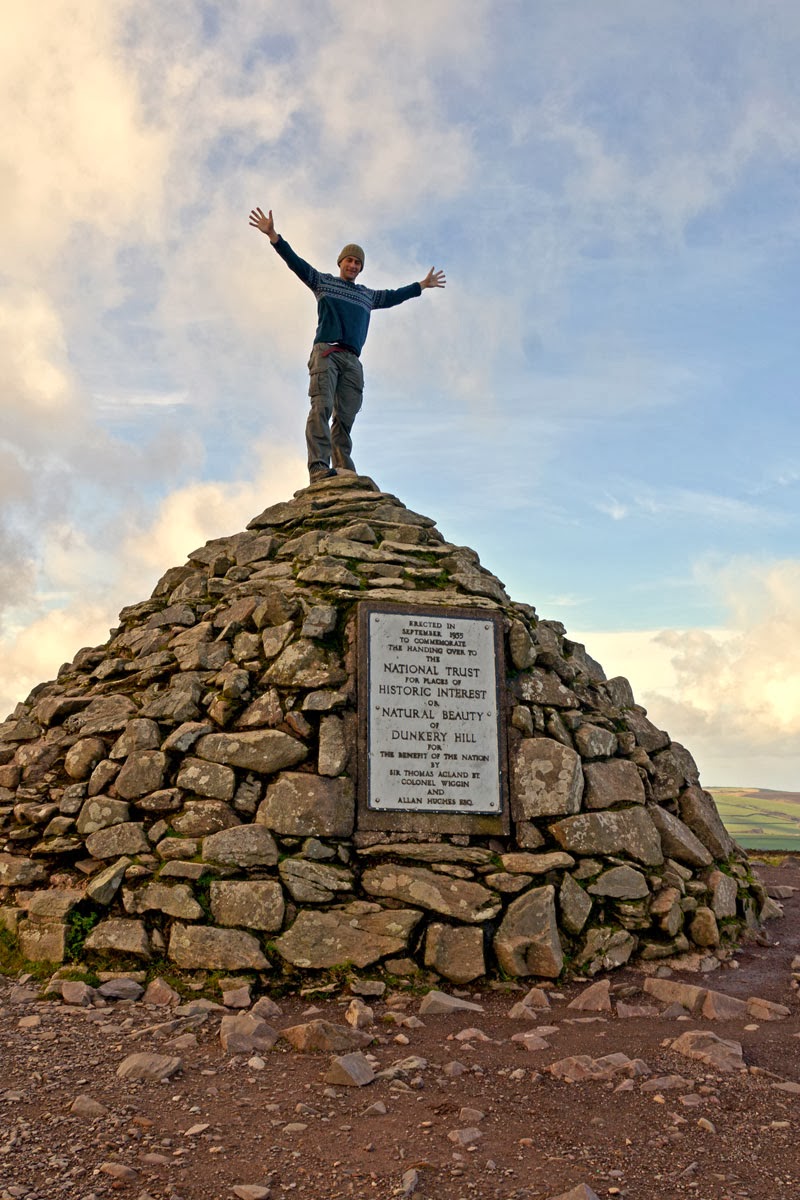 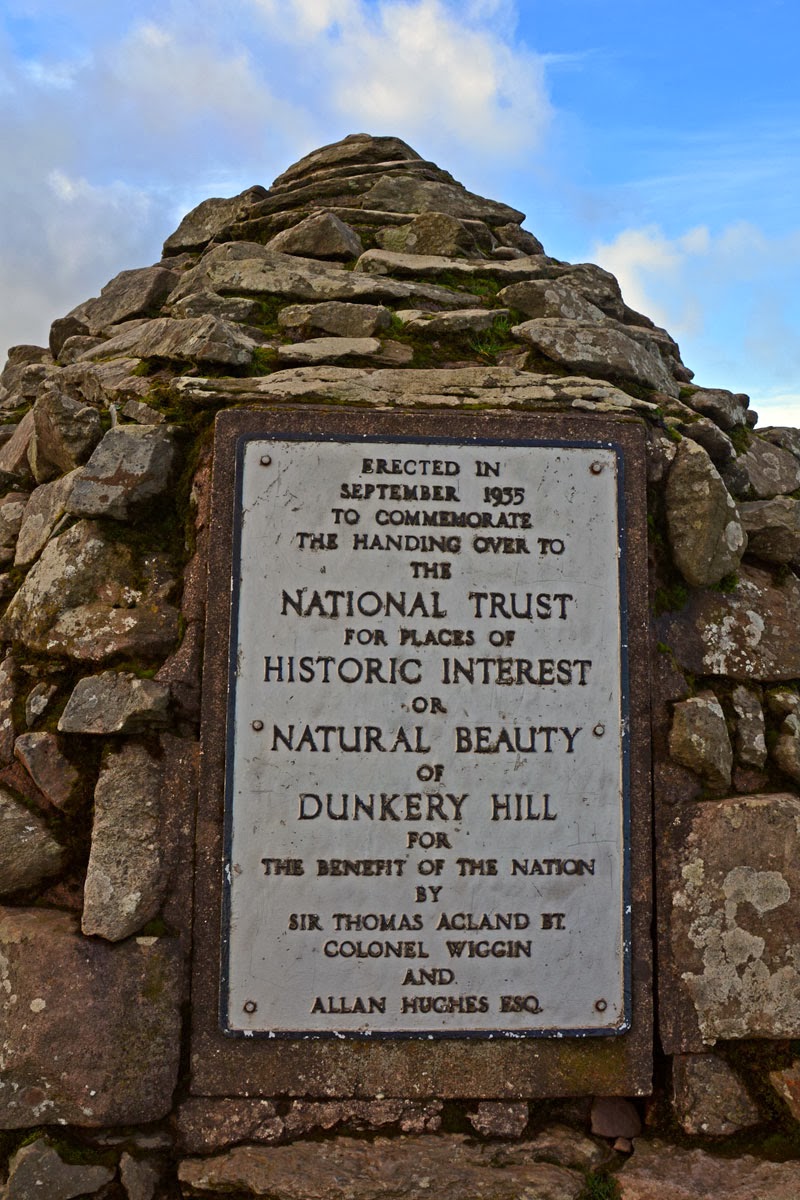