In late April it was time to get another highpoint done so headed off to the hills of Shropshire to a campsite near the village of Church Stretton in the Shropshire hills, It was a beautiful campsite in a small valley between some huge rolling hills, I set up my camp and after a cup of tea I decided to head off walking amongst these hills for the evening.

I headed up the valley and along the river, crossing a small bridge and passing a small farm house and slowly made my way up the slopes of one of the hills to the top, I have since discovered this hill was called Yearlet, and from the top I could see for miles around, including the highest point of Shropshire to the east, the Wrekkin to the north and several other high points on the horizon. This was an amazing hill to climb and not one on my list of highpoint but I felt it was worth mentioning it. after a short stop at the top it was time to head back down the hill to have dinner and get some rest.

The next morning I headed off towards the east to find my high point, it was a 30 minute drive to my parking place near the village of Ditton Priors, I headed off straight up the hill, I knew it was not going to be a long walk, probably just an hour at the very maximum. The path started off zig zagging up the hill a little bit and the views to the east were instantly great to look at, there were a few benches here to sit and admire the view. Continuing along the path there was a lot of forestry work going on and it all looked a bit of a mess but it has to be done, I soon turned off the main path and up a side path through a forest eventually coming to a gate and a flock of sheep. 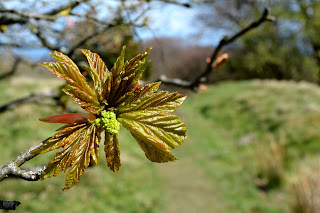 I managed to get through the sheep without disturbing them too much and then I continued up the path, it was getting steeper now and some old mine ruins appeared to my right. The path then went up and over a ridge and joined a road which I followed all the way to the top.The summit of Brown clee hill is dominated by air traffic control towers, there is also a toposcope on what looks to be the highest point, Its not actually on the highest point, that can be found hiding behind one of the radio masts amongst the heather. The highest point sits at 540 metres above sea level.

I stayed on top of Brown clee for a while, there were some great views for miles around and it was handy having the toposcope to point out some of the highlights, I had lunch and explored the actual highest point. There was also a small pond on top of the hill, it always amazes me when I find substantial bodies of water on the top of hills. It was now time to head back down the hill but not before having a quick explore of the old mine buildings.

The mine sits on the eastern side of Brown clee hill and for some reason I seem to think it was England's highest coal mine, I can't actually find out if that is true or not but I must have read it somewhere. The mine is now just a collection of walls but it was quite interesting to see, all the shafts had been filled in so it was quite safe and there were a lot of sheep exploring the buildings too. It was however soon time to head back down the hill.

The walk back was quick, I was soon passing through the flock of sheep and past the forestry works, another stop off at the benches to admire the view and finally back at the car. I still had plenty of the day ahead of me and I wanted to pop to Ludlow for a quick look around (and buy something for dinner), Ludlow was lovely, it has a castle and lots of old buildings so worth a look if you are in the area.

It was now time to head back to the campsite but not before stopping off at a museum I noticed while on my way to the campsite yesterday, it was in the village of Craven Arms and what caught my eye were the words 'come see our Wooly Mammoth'. I parked up and went into the Shropshire hills discovery centre and there he was, a real woolie mammoth skeleton which had been found in the area, it was incredible and huge, a great way to end a lovely day of climbing hills.

Brown clee hill was definitely worth a visit, it has great views and is not too hard to climb, I can recommend the campsite too so check it out - http://www.smallbatch-camping.co.uk/ 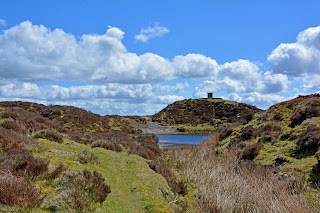 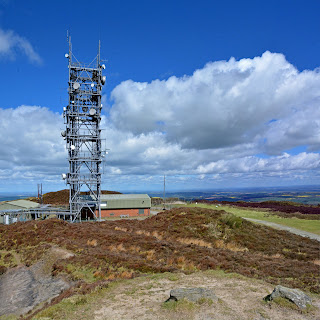 Email ThisBlogThis!Share to TwitterShare to FacebookShare to Pinterest
Labels: Shropshire