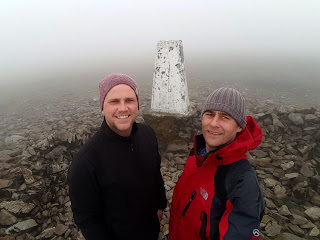 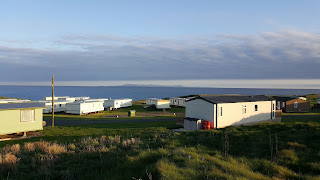 There are several people who sometimes join me for my high points, the person who has done the most is Darren with an amazing 36 high points out of the 126 that I have done so far, the reason he has done so many is because he did all the London high points with me, mostly all on one day back in January 2013. I remember saying to Darren that he should come and do a proper mountain at some point and so the time had come for us both to make that happen. 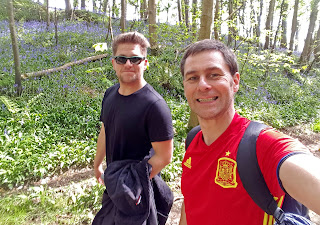 Now Darren has a favourite movie, The 1973 film The Wicker Man starring Christopher Lee and Edward Woodward (or Ewar Woowar for those in the know) and when we started to plan his trip he mentioned about visiting some of the filming locations for the film so that is what we would do, a combined mountain/Wicker man trip. The Wicker man was filmed in Scotland and we managed to find a holiday park on the actual site of some of the filming so off we headed up the M6 to Scotland and the Burrowhead Holiday Village near Whithorn.

Before I go any further I need to say that there are Wicker Man spoilers, so if you have never seen it and don't want it ruined then go watch it now, I will wait while you watch it . . . . . . 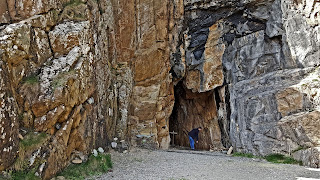 We set up camp and the first night was spend exploring the holiday park but the next morning we were off for a drive around the local area to see some of the Wicker man sights. we were quite lucky as we managed to find both sites where they filmed the actual Wicker Man being set on fire, We also found the hole in which Edward Woodward was led out of before he was taken to the Wicker man, and further down the coast we found St Ninians cave which was used in the movie. The Isle of Whithorn is a small fishing village in the local area too and we stopped here for some food for our barbecue that night, we ended up buying some fish from a travelling fish salesman, (that was odd and expensive). 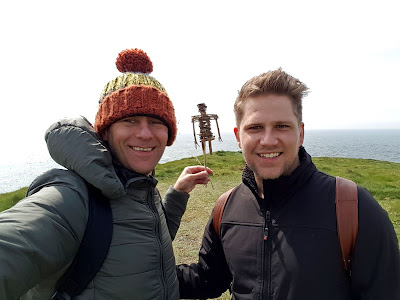 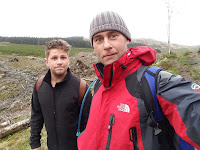 The next day it was time for a hill climb and we headed north to the Galloway Forest park where we parked amongst the hills next to Loch Trool. We left the car and were soon walking along the side of a river, there were a few waterfalls along here which were nice and after a few smaller hills we were walking through a large open flat area with a ruined spooky stone cabin overlooking the river and mountains. After a bit of an explore we headed off again and were soon climbing up the slopes of our mountain, firstly through the forests and then out into the open moorland. The climb was going well but the weather was slowly deteriorating, It had started off cloudy and dry but it was turning damp and windy and we were now starting to walk into the cloud.

After a few snack stops we were now getting close to the summit, we couldn't see the high point until the very last minute due to the thick cloud cover but it was good to see and we found some shelter from the wind in a small stone structure near the Trig point on top of Merrick, at 782 metres it is the highest point of Dumfries and Galloway. After a stop for food it was time to move on to our next high point, it was not very far from Merrick however it soon became apparent that the cloud and wind combined with a very rocky ridge and steep slopes made the rest of the walk rather difficult and a little bit dangerous. Merrick - Kirriereoch Hill the highest point of South Ayrshire at 782 metres above sea level. 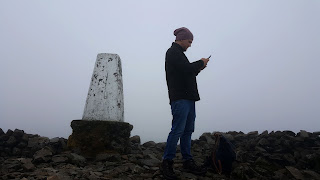 There was no way I was going to carry on and risk any injuries without being able to see where we were going. I do have a little rule in my high points challenge and that is that I will get as close as possible to any high points, sometimes it is not possible to get to a high point due to it being private property or if the weather is too bad or if it is too dangerous so we decided that this was as close we were going to get. 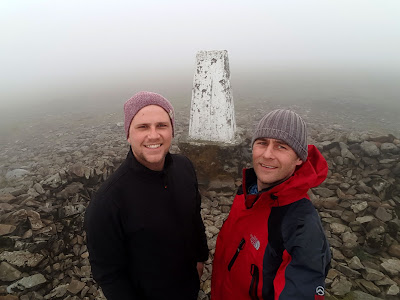 It was now time to make our way back to the carpark so we retraced our steps and passed Merrick again and worked our way back down the slopes of Merrick, through the forest and along the banks of the river and back to the car, near the car park over looking Loch Trool we stopped at a memorial to Robert the Bruce, It was here that Bruce and his men were victorious against the English in 1307, a really beautiful place to visit. 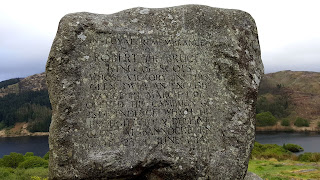 Back at the campsite it was barbecue time again and time to set fire to the Wicker Man, It was sun set and Darren had made a mini Wicker man and the plan was to set fire to him in the same location as the original Wicker Man, it took us a while to get him lit but we managed it and we danced around singing pagan ritual songs as the sun dipped below the horizon (not really, we just burnt the little wicker man). Now it was time for a well earned rest before our long drive home the next day. After packing up the tent we set off for home and on route we stopped off at several other Wicker Man filming locations. It was a brilliant trip and Darren was excellent company, I look forward to climbing another hill or 2 with him, Thanks Darren. 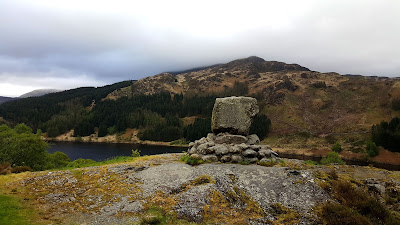