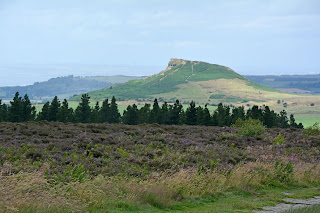 My cousin Charlie is Mountain mad, He loves climbing and all things outdoors, he is often popping up to the Lakes or Scotland to climb mountains and he has been doing this for years, the odd thing is that he has never joined me on my High point quest so it was time to change that, Charlie was going to be up in Yorkshire area for a while and had a few days spare so we thought it would be a good opportunity to get some high points ticked off.

I left on the Tuesday morning and travelled up to Yorkshire and our Campsite in the small village of Little Ayton on the edge of the North Yorks National Park, Charlie had been off climbing a mountain for his own personal challenge that day but he met me at the campsite not long after I had arrived and we set up camp and settled in for our few days break. 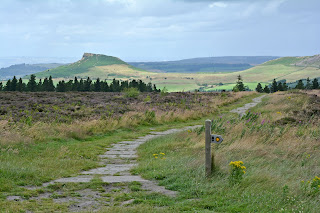 Like me, Charlie has set himself some hill/mountain climbing challenges, one of them being the Trail 100, this is a list of the 100 best mountains across the UK as chosen by the Trail magazine, it is an impressive list and features lots of the hills and mountains that I have already climbed or will need to climb during my own challenge, one of the hill, the smallest of the Trail 100 list is called Roseberry topping. Now roseberry topping is NOT on my list however it does have a place in my heart, many years ago I knew a magician in Redcar, I would visit him and he would show me around, Roseberry topping would often make an appearance in our drives around the countryside. Sadly he died and the night before his funeral I spent the night sleeping in my car at the base of Roseberry Topping. I remember waking up that morning and looking up thinking how amazing it would be to climb it, I never did and I have wanted to ever since so this was going to be a great opportunity for Charlie to tick off a Trail 100 summit and for me to cross off what I will now consider to be an honorary high point.

On the Wednesday morning we set off with 2 hills in mind, Roseberry topping and one of my high points, We left the campsite and walked along some country lanes quickly coming to footpaths crossing the countryside, We passed some archaeological remains at one point, apparently they were the remains of the house in which the parents of Captain Cook lived. When we left the campsite the forecast for the day was dry, no rain whatsoever, looking behind us however it was a different story, we could see the rain coming and we didn't have our wet weather gear. On the slopes of Roseberry topping we could see a possible shelter so we pressed on and made it to the shelter just as the rain started. The rain didn't stay too long and we were back out climbing up to the summit of Roseberry Topping, one of the most beautiful hills I have ever had the pleasure of climbing, the views were just incredible and I was so pleased to get to the top. 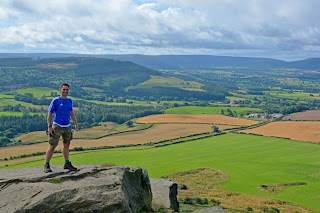 From Roseberry Topping we walked eastwards back down the hill and then up again onto the open moorland of the North yorks National Park. The path was fairly level across the open moorland after some time we reached a trig point where we changed direction to the south and finally we reached the highest point called Gisborough Moor, at 328 Metres it is the highest point of Redcar and Cleveland. The land was fairly flat around here and on the highest point there was a small stone structure just big enough for us to shelter in and have our lunch, the wind was strong so we needed the shelter. 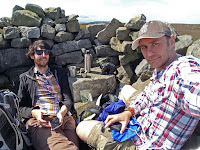 From Gisborough moor we retraced our steps a little bit and then decided to take a gamble on a different route back, there was a farm in the bottom of a valley in our way however Charlie was convinced there was a way through so we thought we would give it a go. On arrival at the farm there seemed to be a footpath but it went in totally the wrong direction but we managed to work our way through the farm and all we were soon working our way up the other side of the valley. Onto a country road now and up to a ridge where we joined another road and walked along to find a path downhill again, this pathway had been affected by some serious water erosion recently and at the bottom we stopped and Charlie cooked us some pasta for lunch.

After pasta we headed up another hill and into a forest where we emerged onto Easby Moor and the Captain cook monument overlooking the vast flat area of land surrounding Middlesbrough. From here is was just a short walk back down the hill to the campsite for a delicious home made vegetarian spicy ratatouille concoction that Charlie had invented from all his leftover food (very yummy).

On Thursday morning it was time to visit some more high points so off we headed into the North Yorks National Park again, This time we drove to a car park with a spectacular view, it turns out we had both been there before on separate occasions. We left the car park and walk through the forests for a while, we missed a turn at some point but it didn't matter, we soon turned off our path and were back on track heading up hill onto open moorland. The views were pretty good along this path and in the distance we could see the rain coming again but this time we were prepared for it. We kitted ourselves up and carried on and when the rain eventually arrived it was VERY heavy and we got drenched. Despite the rain we managed to get to Round Hill on Urra Moor, at 454 metres it is the highest point of the North York Moors National Park. 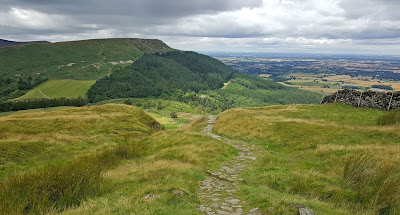 The Rain was really pelting down so we headed back to the car and the sun was soon shining again and drying us off before we got the next soaking from another shower. Once back at the car park we headed back to the campsite for a dry off and some lunch and then we headed off to find more high points. These next few high points were going to involve much walking or climbing as they were all of the kind that were on the side of roads near roads and I was wondering if Charlie was going to enjoy these as they are not much of a challenge however he really got into it and treated it like a treasure hunt reading the maps and telling me where to drive. For the first stop we parked in a layby on a quiet road and walked through a small farm and then across a main road. Passing through a field (with Bull warning signs) and past a house we were as near as we could get to Quarry Hill, the highest point of Middlesbrough, 100 metres above sea level. back through bull field and driving to our next destination just 15 mins drive away. 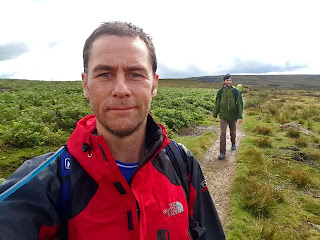 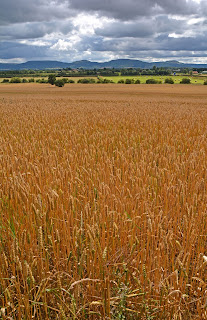 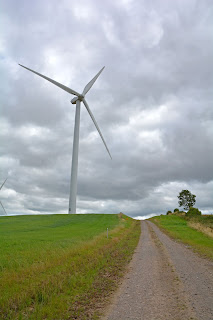 Boy hill was quite an exciting one, not very high but it had lots of interesting features, mainly the wind farm domination the landscape, now if you have read my blog before you may know I love windfarms, well here is where I find out Charlie does too, we spent a while walking around, the high point was rather attractive as it was covered in manure, my first high point made of manure, I was not expecting that, there is a first for everything I guess. So at 82 metres Boy hill is the highest point of Stockton

Moving on to our next high point it was about a 45 min drive, and with Charlies expert map reading we had soon parked directly on Dere Street, the highest point of Darlington at 219 metres. The last high point of the day was another 30 min drive away back towards the coast and along part of the A1M and eventually we parked in a layby. our destination was a hill in a farm across the road, Normally on my own I would just get as close as I could however Charlie convinced me it would be ok to risk getting shot at by an angry farmer (I knew that wouldn't really happen) and soon we were standing on the highest point of Hartlepool, Whelly Hill at 142 metres. The last thing to do was to make our way back to the campsite and I did that by crossing the River Tees by using the Tees Transporter Bridge (look it up, it is amazing).

Thanks to Charlie for joining me for a few awesome days of hill bagging, I can't believe I managed to tick off 6 high points and an honorary high point. 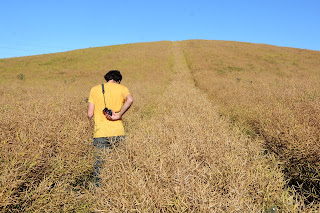