I woke early in the morning and through the canvas of the tent I was greeted by the sound of sheep in the field next door. I had arrived here the previous day after climbing Cleeve hill in Gloucestershire, It was a nice campsite, near the village of Welland about 5 miles south of Great Malvern, the campsite was part of a pub called the Millbank and it had all the facilities I needed.

I got up and had some breakfast of sausages, eggs and bacon, and then packed my backpack for the day. The plan today was to walk from the campsite north west to the top of Worcestershire beacon and then east into Great Malvern and finally south back to the campsite, a walk of about 11-12 miles. I left the campsite at about 10 am and first walked east for a few minutes until I reached a smaller road heading north west, this road took me through a the village of Upper Welland and after another 15-20 minutes I had reached the base of the Malvern Hills.

If you dont know the Malvern hills they are basically a series of prominent hills covering about 5 sq miles, the stretch for about 8 miles and tower over the surrounding towns and countryside leaving much of it in shadow. My climb up the hills started gradually along a residential road and then eventually I found a footpath heading directly west steeply up the side of Jubilee hill, The path then met with another path which headed north along the side of the hills climbing gradually up to the top of Perseverance hill, from the top of Perseverance hill I could see Worcestershire beacon ahead of me and behind me the chain of smaller hills heading south.

The path now headed down hill coming out on one of the few roads that cross the Malvern hills, I was between the 2 villages of Upper Wyche to the west and Lower Wyche to the east, I crossed the road and started the climb up Worcestershire beacon, I was surprised at this point to the amount of people walking up and down the beacon, I stopped for a cup of tea from my flask on the way and carried on heading northwards and up the hills, eventually I climbed the last paths to the top of the beacon marked by a trig point and a Diamond Jubilee Toposcope. At 425 meters high the beacon is the highest point I have climbed to since climbing Scafell Pike last August. 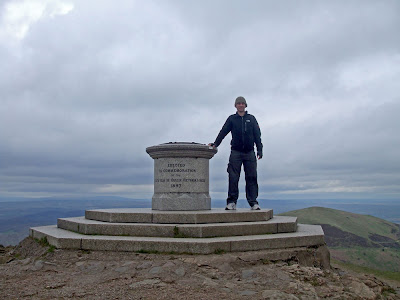 I stayed here for quite a long time eating my lunch and taking some timelapse videos, I had a nice chat with 4 guys from Birmingham who became the subject of part of my timelapses and spent a good time taking in the views. The views from the top were amazing, probably some of the best views I have seen on my highpoints challenge, to the south I could see the long chain of hills stretching into the distance and then to the west I could see Hereford and the Brecon beacons in the far distance. To the east I could see Cleeve hill in the distance with Great Malvern just below me and a patchwork quilt of fields stretching out, It was quite windy up here but I managed to shelter amongst the rocks where it was quite warm. What amazed me here was the fact I could see many of my other high points from the top, to the easy was yesterdays Cleeve hill and then Ebrington hill in Warwickshire, to the west were many the high points I will be encountering in south Wales, I could just about make out the hills near Birmingham and to the south were the hills around Bristol.

you can check out a better quality version of the time lapse here on Youtube - http://www.youtube.com/watch?v=MICSFtb_Y1E&feature=youtu.be

It was now time to move on, I left the top and headed northwards along various paths until I reached a path which headed east steeply down the hill towards Great Malvern, near the bottom of the hills I passed St Ann's Well, The Malverns are famous for its spring water and here you could see the water pouring out of the rocks. Moving on I followed a winding zig zag path down into some rose gardens and into the town centre. I was able to have a good look around the town and I purchased my dinner for my barbeque that evening (more about that later on).

Great Malvern was a lovely little town, I recommend everyone to visit, it has some little museums, nice gardens and some nice shops, it was now time to head back to the campsite, I left the town centre and headed south, through a park and along a few residential roads coming out near a point where the railway travels through a tunnel under the Malverns. From here I was able to follow the course of a disused railway, a nice long straight pathway heading in the right direction, it took me through some cuttings and along various banks until It left the path of the old railway  and off through some farm land. 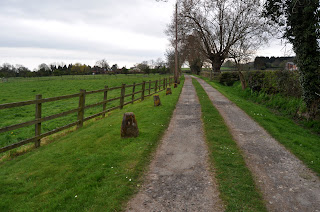 Passing many flocks of sheep I found myself passing the Worcestershire county showground but I soon turned onto another path and then through several fields, through another farm and finally reaching the main road where I took a left turn ending up at the campsite again.

After a quick wash and a cup of tea it was time for dinner, In town I had decided I was going to be adventurous and buy a whole fish to eat, I couldn't find a fishmongers so in Waitrose I purchased a Greek Sea Bream. I cooked it on my Barbeque and kept drizzling lime juice over it. The fish was delicious, I mean really delicious, it didnt take long for me to eat that with some pasta and salad, after dinner I washed up and eventually headed off to bed.

My Journey home the next day was nice, I stopped off in Tewkesbury for a look around the abbey and town centre, again it is well worth a look if you are in the area, I finally left Worcestershire and headed back home after a really amazing few days.

Both Cleeve hill and Worcestershire beacon were awesome climbs, The beacon being one of the best yet, now where will I head next time?

Here is another project of mine to take a look at - As a magician and balloon twister I have challenged myself to make a different balloon sculpture every day for a whole year, you can check them out here -

Its been a bit difficult to get out climbing recently but now the warm weather is coming back it was time to get back out there and get climbing, I have been running out of local hills to climb so it was now time to start travelling further afield, I had been planning this trip for a while and it would involve a stop over somewhere to make things easier.

My first destination on this trip was Cleeve hill, the highest point of Gloucestershire, it overlooks Cheltenham and is about a 2 hour drive from Portsmouth. I left home and drove along the M27 and up the M3, then following the A34, then along the M4, At Swindon I turned off and followed various roads into Cheltenham and eventually I saw Cleeve hill and headed towards it.


I parked in the village of Cleeve hill in a layby and got my kit ready for my climb to the top of the hill, there would actually be a series of hills for me visit here, so I headed off up the first hill, It didn’t take me too long to get to the top, it was pretty steep but I was up there in about 20 mins, a lot of the area is a golf course but it is open common land too so not a problem to walk around on as long as you watch out for golf balls.


At the top of the first hill was a trig point and a small structure showing various sights to look out on the horizon, the view was spectacular from here, down below me was the town of Cheltenham and I could clearly see the world famous race course, I could also see Gloucester in the distance. The other thing I could see was my next hill to climb but more about that later on.

I now walked to the next hill, down a small dip and along in a straight line towards a trio of communication masts, this was about a half hour walk from the last hill top but this one was the highest point of Gloucestershire, There was a trig point marking the exact location at 330 meters, the views were good but not as spectacular as the last hill overlooking Cheltenham. I stayed here and ate my lunch, it was nice sitting here with very few people around.


It was now time to head back to my car, I actually walked a little towards the south and stopped off at another viewpoint, it was here I saw the Lone tree, the highest tree in the Cotswolds, it is a very windswept tree and it has a small wall around it which is used as a memorial, there were more amazing views over Cheltenham from here.

I now had to head back to the car, it was not far from here, just 15 to 20 mins walk and I was back where I started, it was an awesome walk with some amazing views for miles around.  I now headed west across the M5 and across the River Severn, arriving at my campsite where I pitched my tent for the next 2 nights. It was a nice quiet campsite, in a field next to a pub, I say quiet, the only other occupants were the sheep in the field next door but that was fine, they kept me company for the duration, that evening I had a lovely barbeque and then headed off to bed ready for my next climb tomorrow.

Check out my other blog - www.mydailyballoon.com
Posted by Magirob at 16:17 No comments: