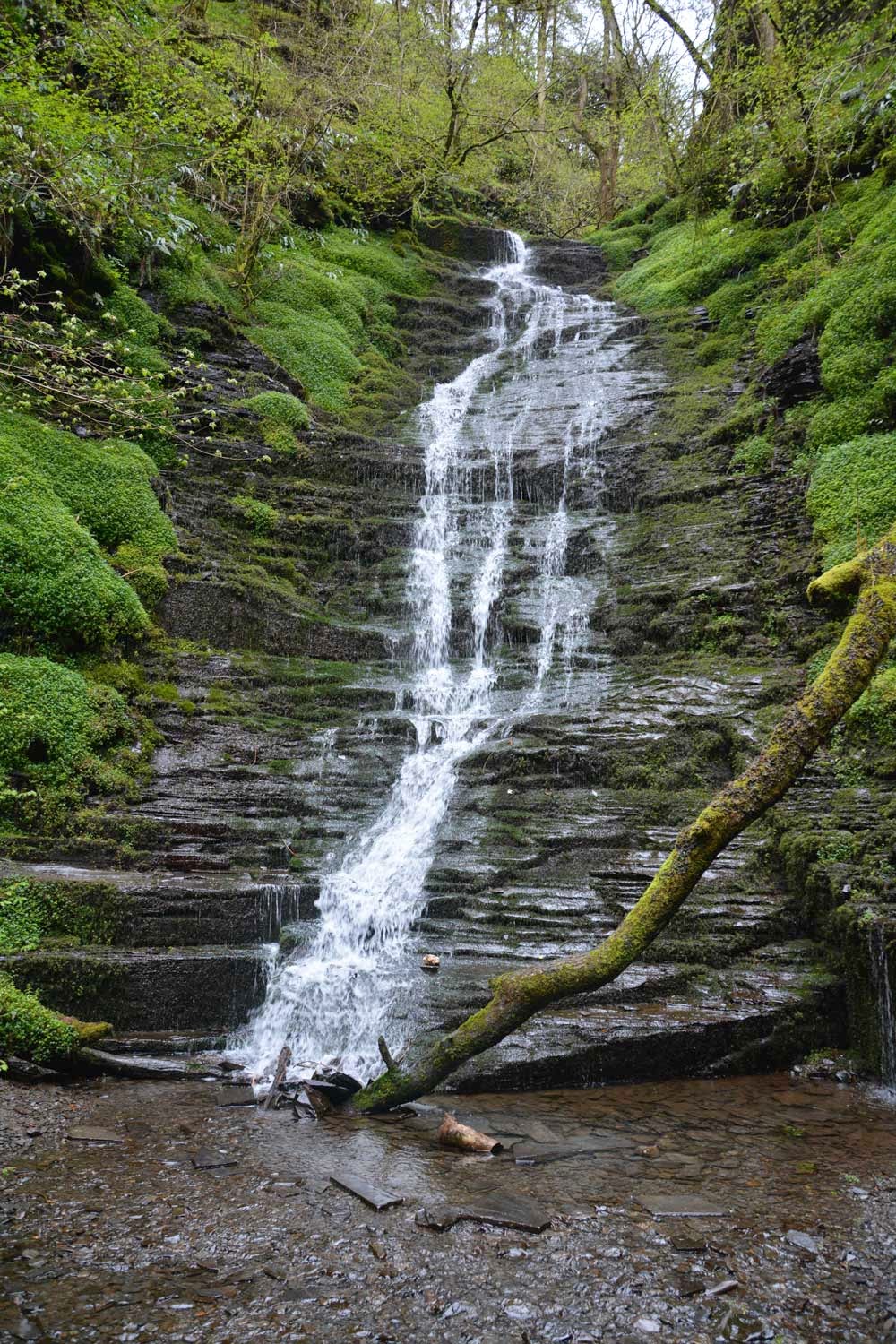 Back in the 70s the counties of the UK were rearranged, some were moved, some expanded and some disappeared never to be seen again, it was time to climb to the highest point of one of these historic non-existent counties - Radnorshire.

Radnorshire lies completely within the current county of Powys and the highest point of Radnorshire is Great Rhos near the village of New Radnor. I packed up my van with all the essential camping equipment and headed off to Wales. My campsite was called the Old Station caravan and Camping park and on arrival I was welcomed by the lovely owners who showed me to my pitch where I set up camp next to an old railway engine shed. It was such a lovely peaceful campsite with a field of sheep for company. 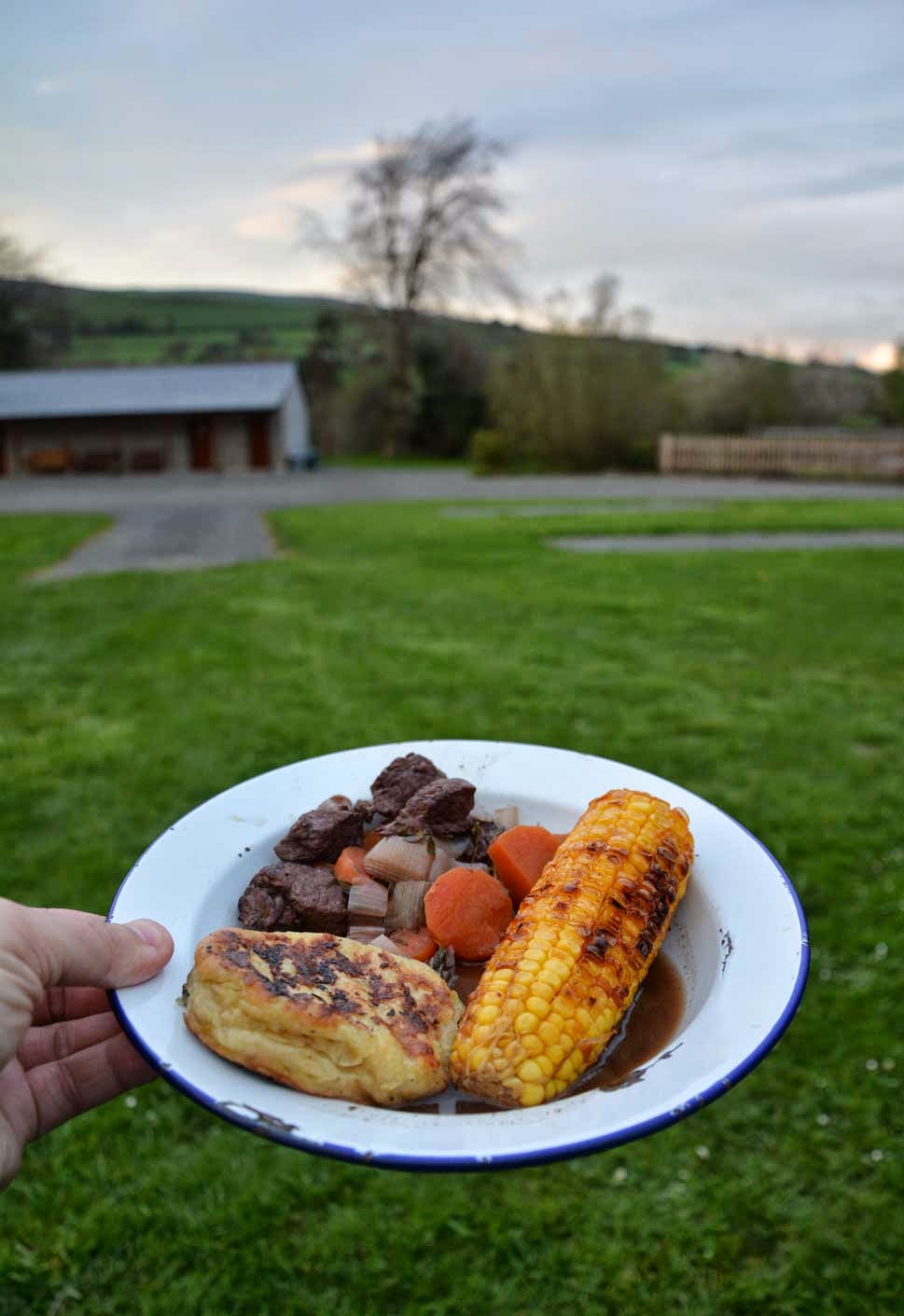 Once I had set up camp I headed out to visit a local waterfall which was situated just a mile down the road, I parked in a carpark and headed off into the forest to find the falls. My first view of the 'Water Break Its Neck' waterfall (unusual name I know) was from above and it looked magnificent below me, I worked my way around over the top of the falls and eventually down to the river which I followed to get back to the waterfall again.  As I walked along the valley the sides started to tower up over me and I eventually reached the base of the waterfall, it was a beautiful sight and it was so lovely to get so close to it and feel the water rushing down the stones. I eventually made my way back to the campsite where I cooked a nice dinner of beef stew and then I went to bed ready for my big climb the next morning.

After breakfast the next morning I packed my backpack with lunch and headed off to climb Great Rhos. The route first took me into the village of New Radnor where I stopped at the shop for supplies and then I headed north out of the village and into the countryside. Just as I left the village I passed a huge mound, this was the location of an old Norman castle. it was surprising to find out that this little quiet village was home to quite a major castle and some quite interesting history including many attacks where the castle was destroyed and eventually re-build several times. Continuing up a road away from the village I then turned onto a smaller lane which climbed up the side of a hill and eventually had views back over the village. 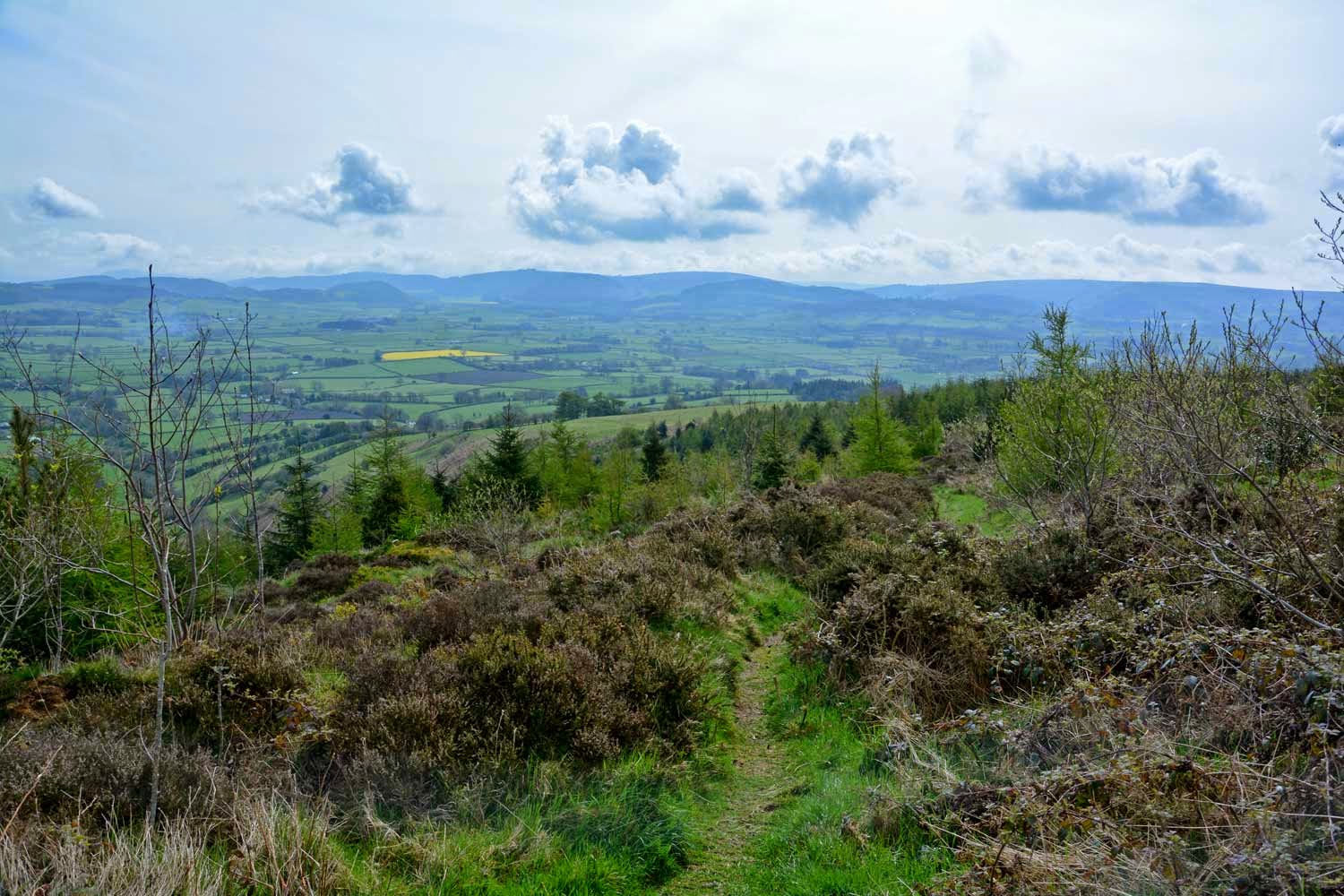 Eventually I turned off this path and into a woodland, I walked through this woodland for a while, there had been a lot of forestry work taking place in this area with new trees and lots being cut down, the path was climbing up all the time and eventually came out onto some areas. A new path took me up further towards the top if a nearby hill and eventually became open moorland, it was along here that the views became really amazing, all the way back over the village and miles to the hills in the far distance, I also passed two people along here who said hello, the first 2 people I had seen since the village. The path now descended back down into a small valley and then back up the next hill past some old quarry works and on to the top of a hill called Black Mixen. 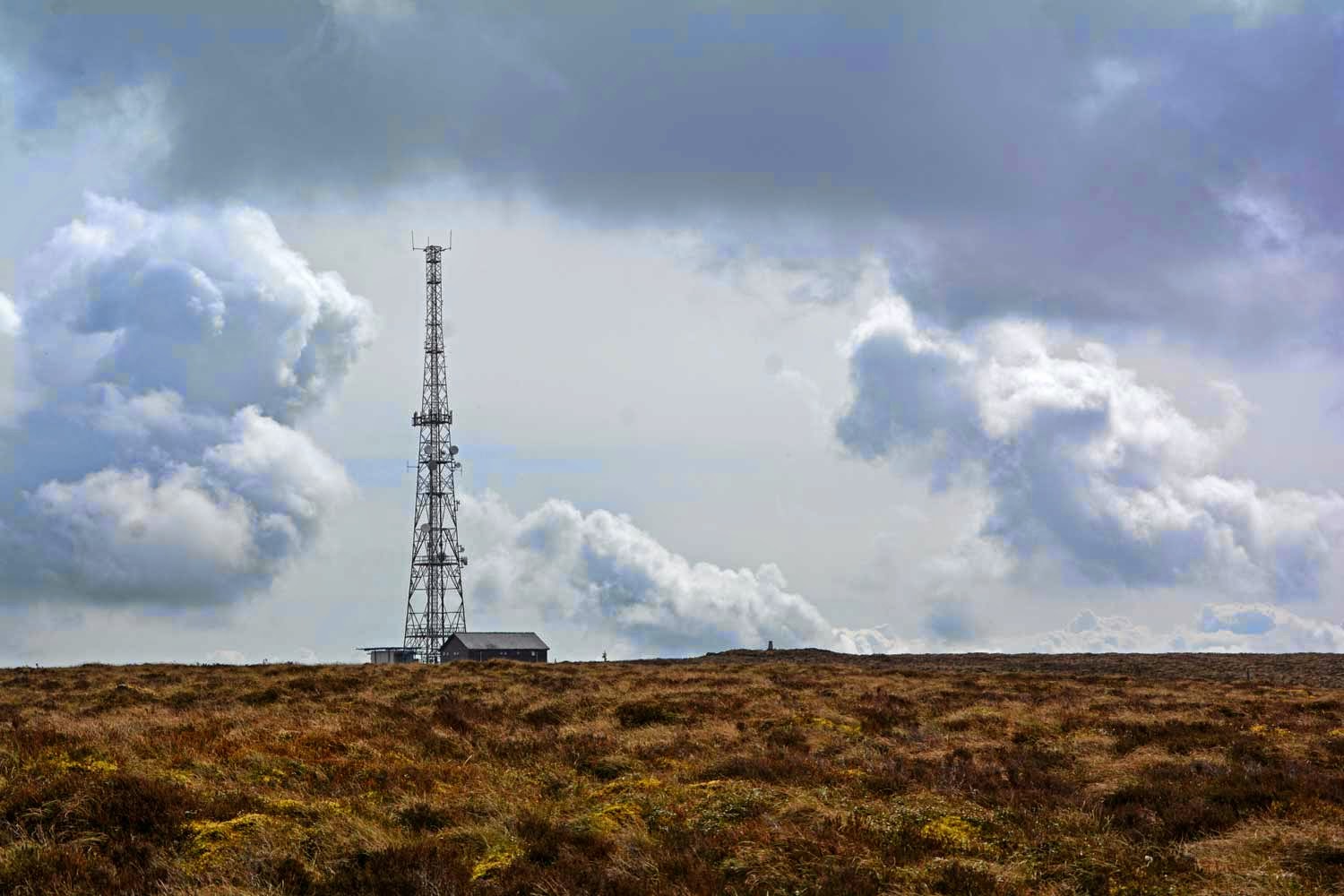 Black Mixen is home to a huge antenna and it was odd to see some works vans parked up here, obviously some work was being done but I didn't see anyone, it was eerily quiet and I continued onward. From this point I could see my destination in the distance so I pushed on along the path. In the valley below was a firing range so I has to walk around the valley first to get to the other side where the next hill was located. The path took a sharp left and I went along the edge of a forest and over some styles eventually heading out onto open moorland again and finally up to the highest point in Radnorshire and Great Rhos.

At the top of Great Rhos there were a few things I noticed, firstly a trig point marking the top, a man eating his lunch and some AMAZING views to the south and west all the way to the Brecon Beacons. I stayed here for a while and ate my lunch and took some photos and then it was time to move on and back towards the campsite. My walk from the top continued along the edge of a firing range, it wound its way in and out of the heather and then down the side of a hill. Soon I followed the path further down and eventually I got some amazing views over the firing range which was situated down in the valley. After a while the path crossed a stream and I arrived back onto the edge of the village, I walked through a few fields and then past the church and finally back into the village centre, finally crossing another stream and road and into the campsite. Thankfully the campsite had a little tearoom so I grabbed a cup of tea and slice of cake which was delicious. 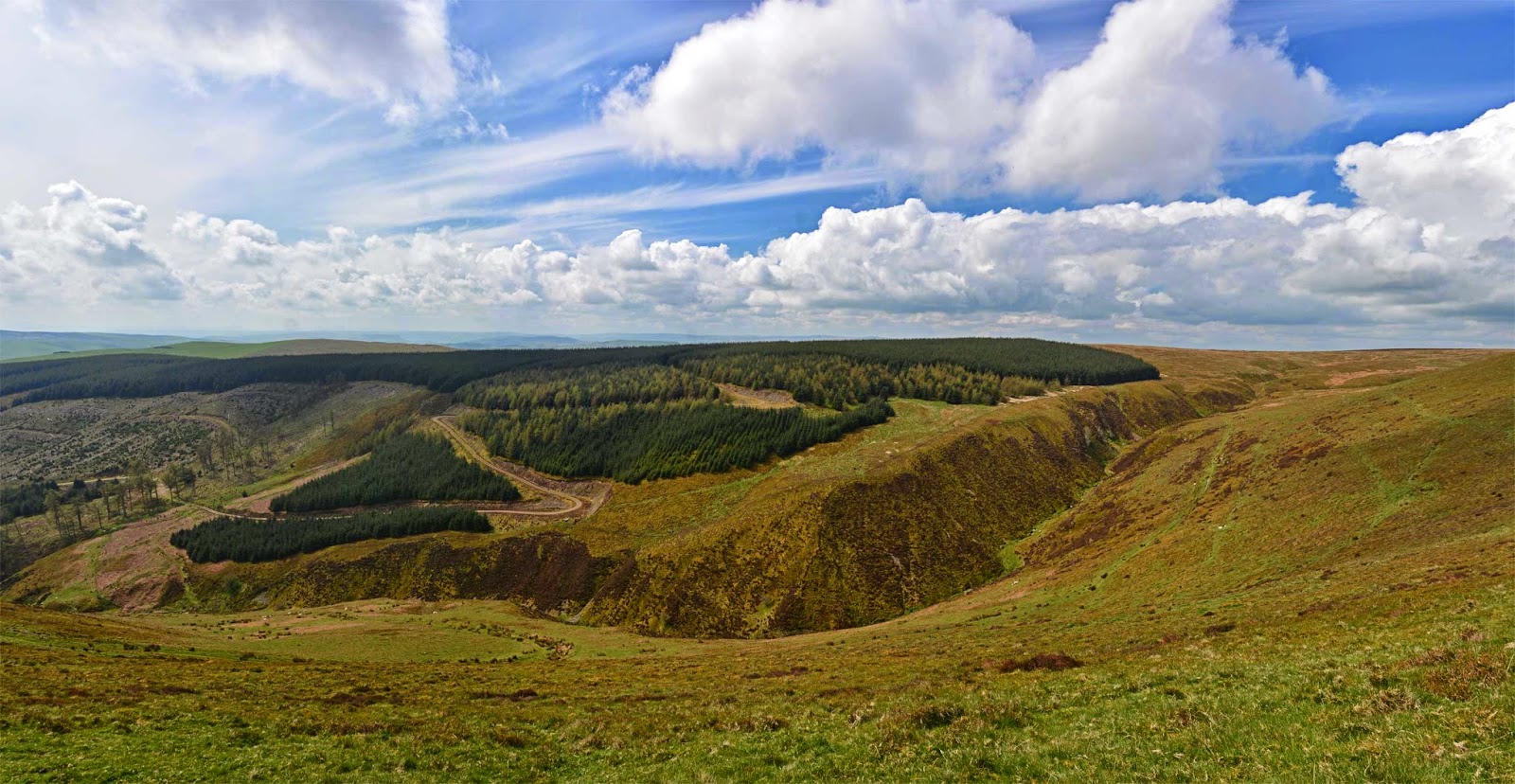 That evening I had a barbecue with chicken, sweetcorn, potato cakes and pancakes for desert and I spent the evening relaxing after my long walk up to Great Rhos. The next day I packed up and drove home in the rain, I was lucky not to get too much rain while I was away and I had a brilliant time. Great Rhos is well worth a visit and I was treated to some amazing views along the way. 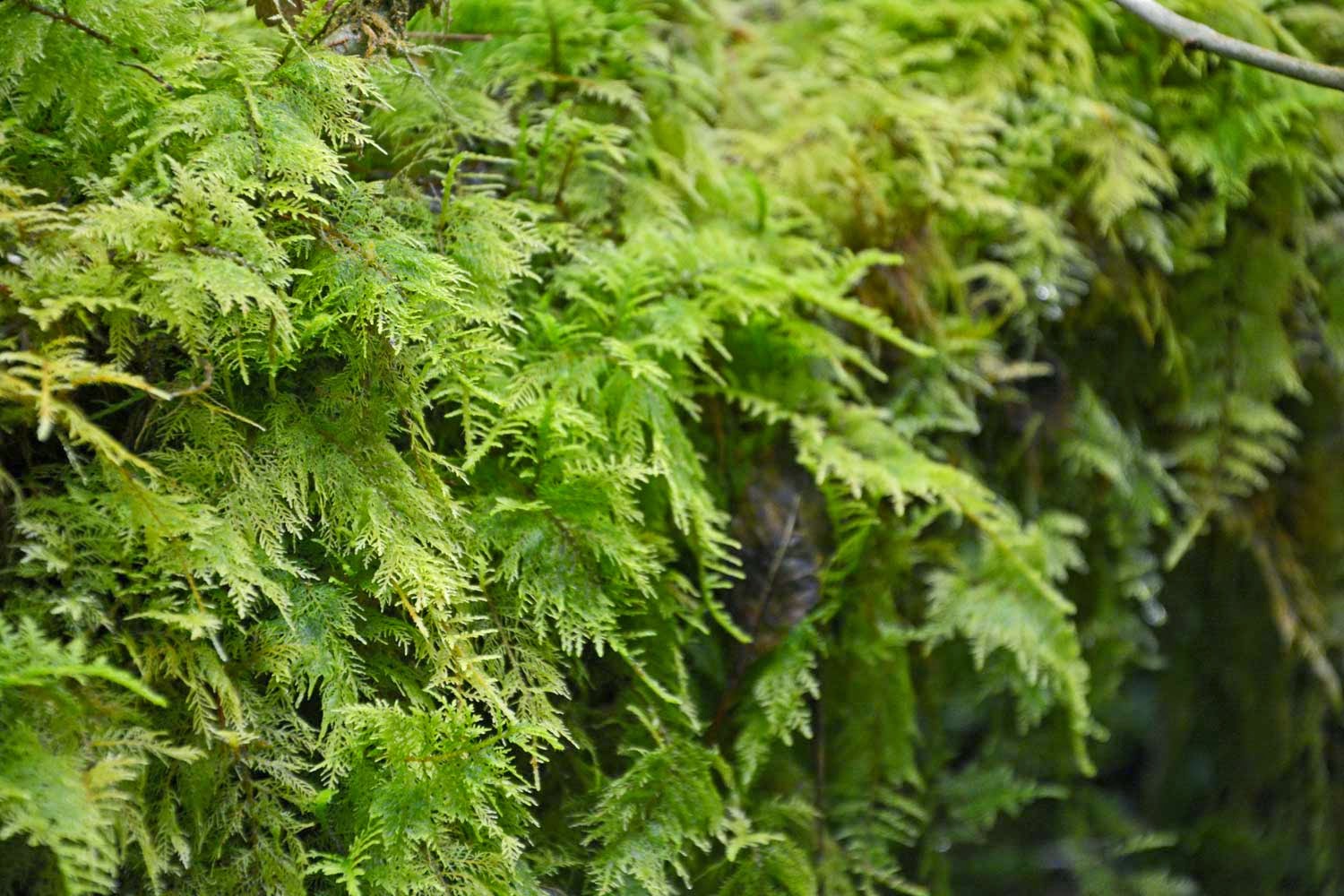 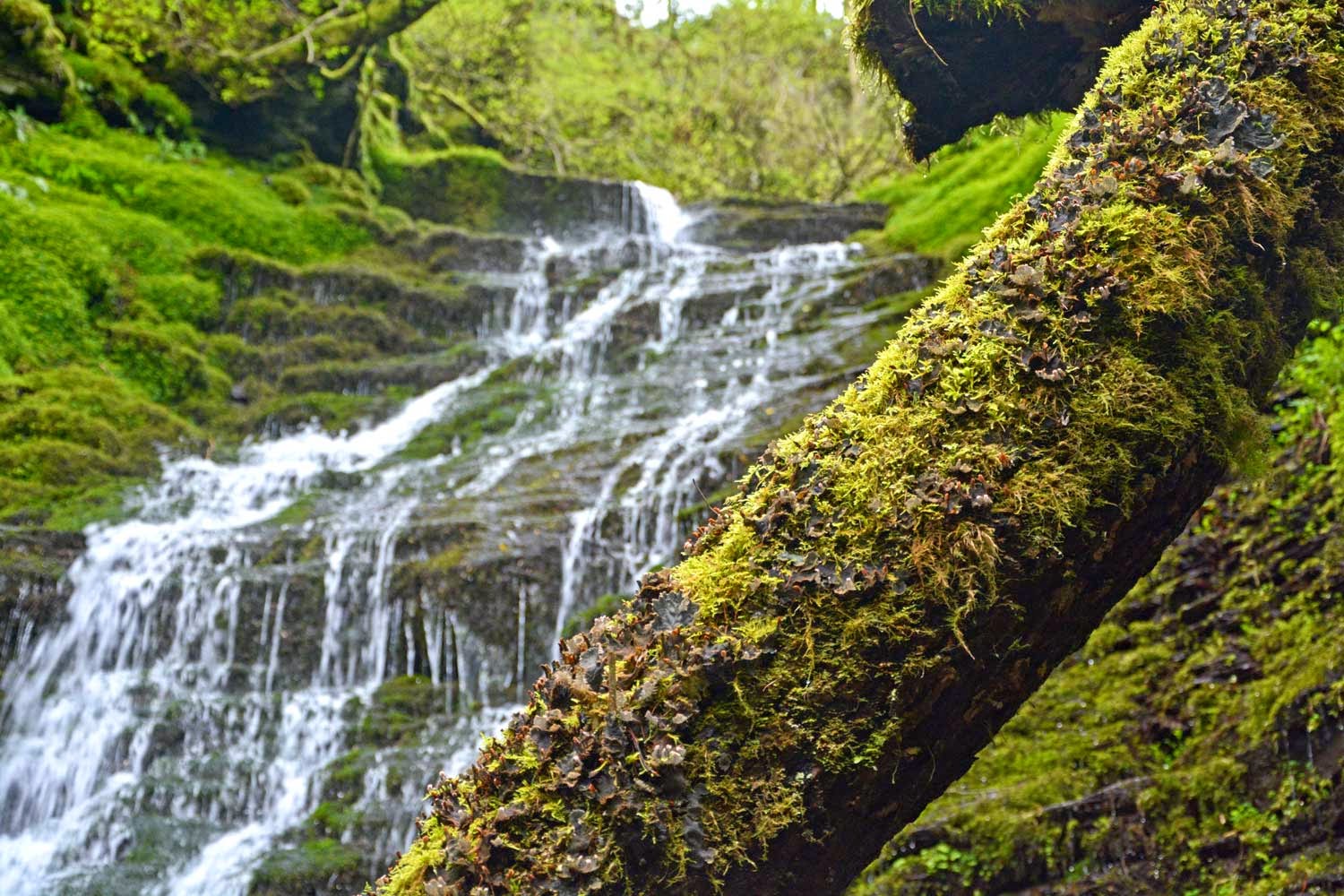 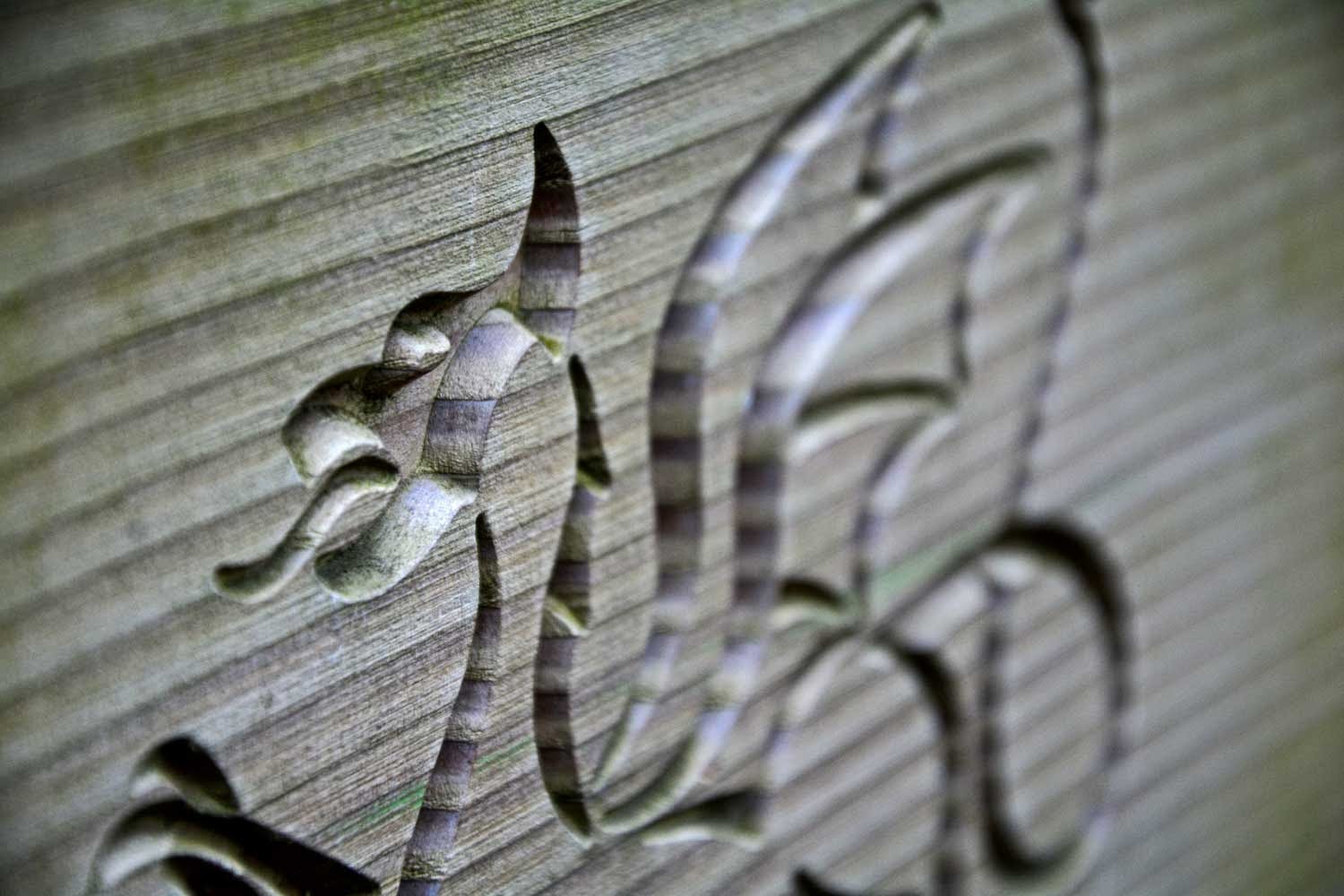 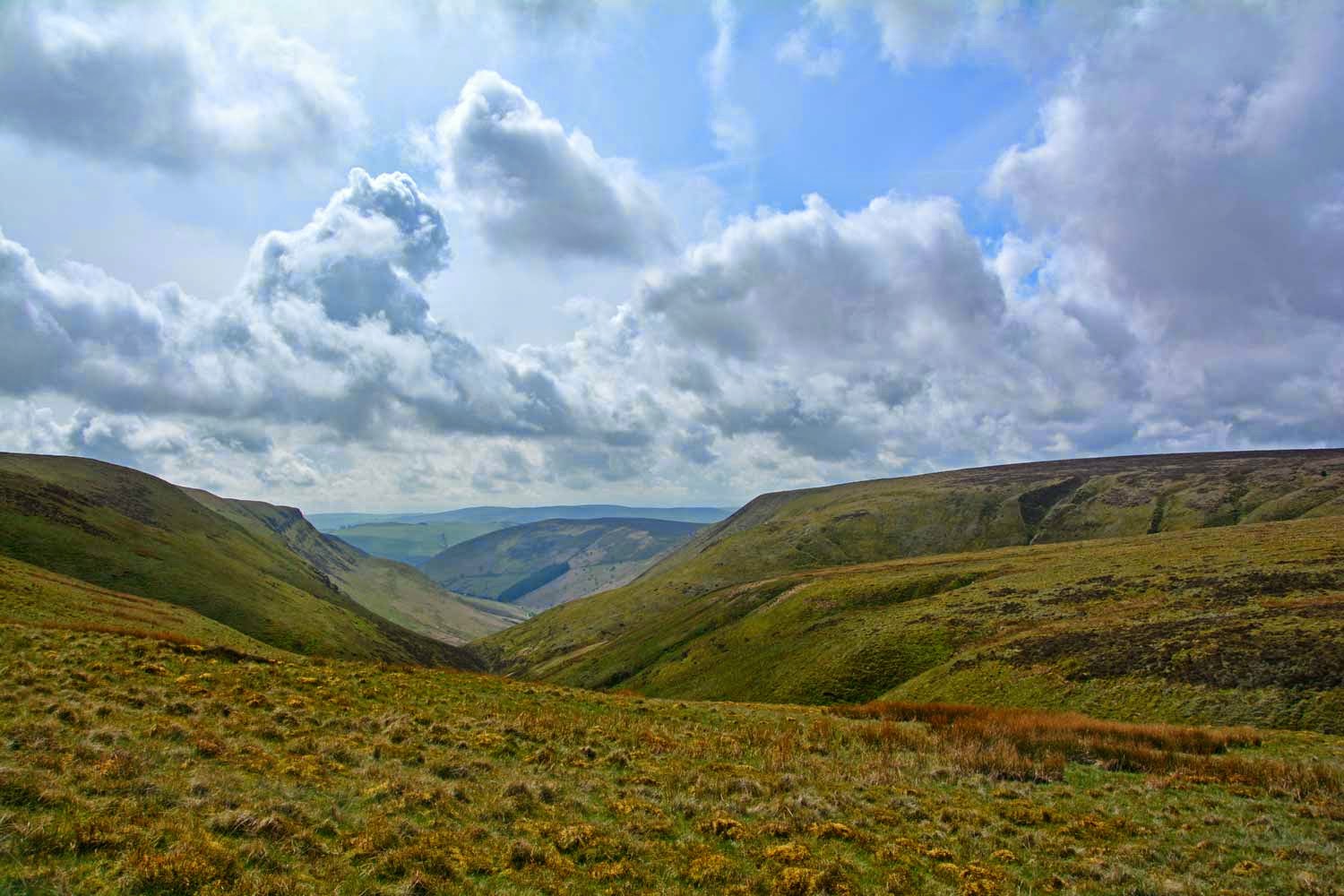 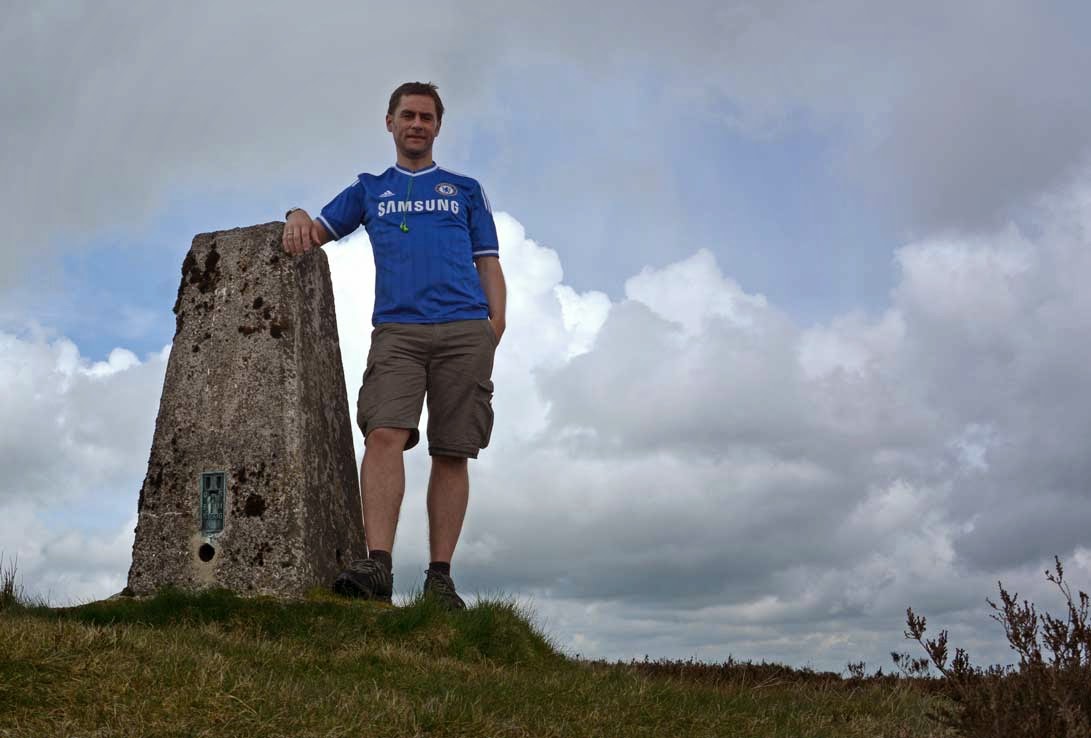 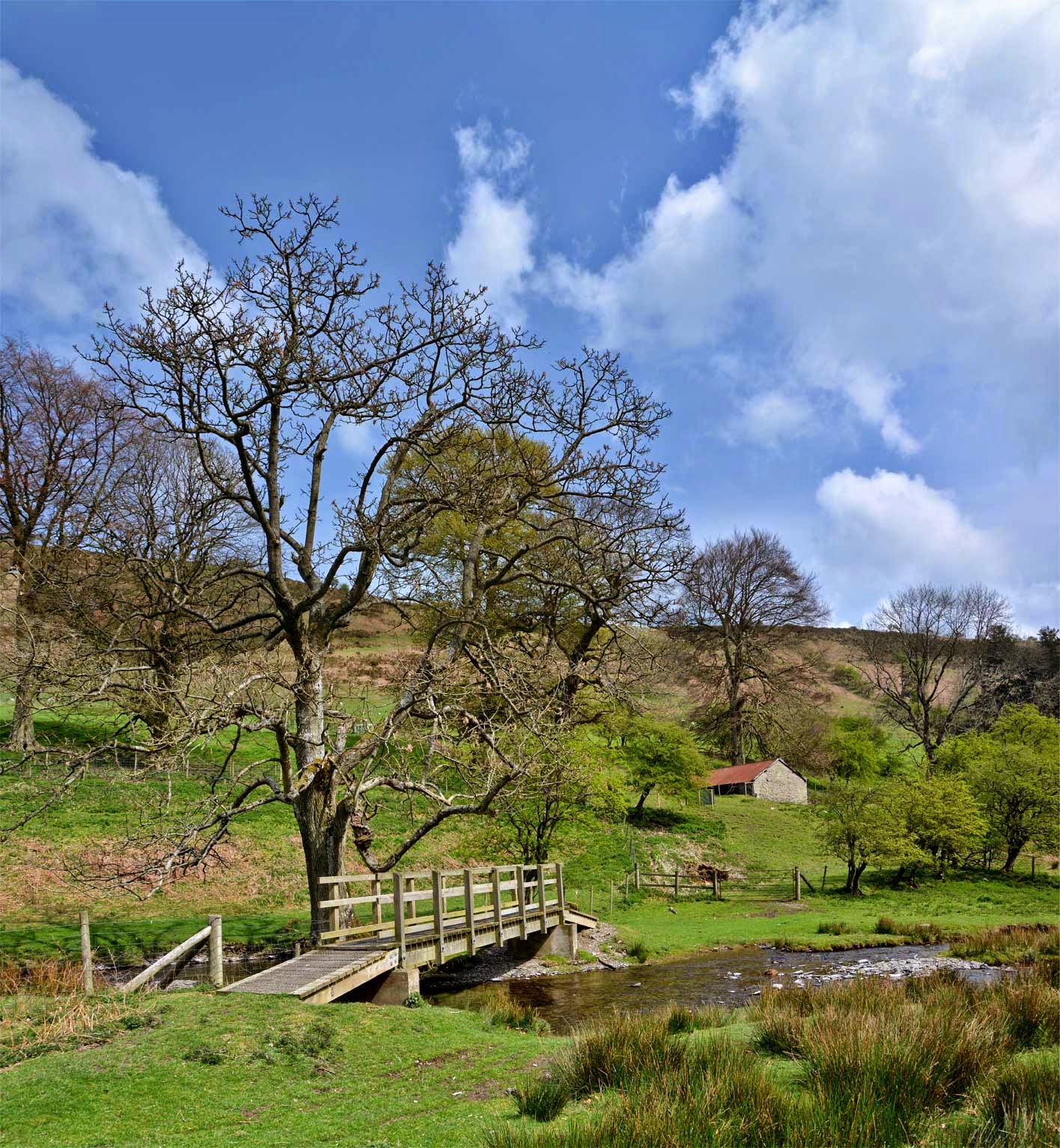 Email ThisBlogThis!Share to TwitterShare to FacebookShare to Pinterest
Labels: Rhadnorshire