During the month of December I knew I would not get to climb many high points, this is my busiest time of year and there was no way I had the time to get away for the day to climb a hill, however with the Christmas rush over it was time to get back to climbing those hills. 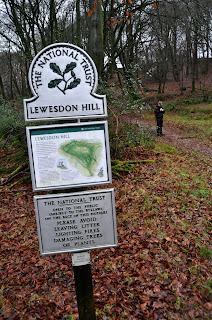 Today it was going to be Lewesdon Hill which is the highest point of Dorset, It can be found about 6 miles north of Bridport and it was around a 100 mile drive from my home in Portsmouth.

On leaving home my first thing to do was to pick up Chris as he was joining me for this walk, then we set off along the M27, A31 through the New Forest, the A35 to Bridport and finally the B3162 up to Beaminster and our car park. The Rain had started once we arrived at the car park so we put on the wet weather gear and set off.

Leaving the car we initially headed away from Lewesdon Hill, this was because we wanted to climb up Pilsdon Pen first. at 277 meters high Pilsdon pen is the second highest point in Dorset and it is also the site of an iron age hill fort, it was not far to the top and once there it was obvious this was a sight of archaeological significance. The top of the hill was a large plateau about the size of a football pitch, almost perfectly flat with a moat running around the edge.

We didn't stay to long on the top of Pilsdon Pen as it was raining pretty hard. so we headed across the plateau and down the other side now heading towards our final goal. We headed down the hill and through a few gates and then across a field finally reaching a road. the rain was pretty hard and the road was like a river, my feet were now wet but this was not a problem, we carried on.

After a while we turned off the road and down a smaller lane, it was not long before I realised I had made a mistake and we had gone the wrong way to we headed back up the lane and a little further along the road to the correct lane, this new path headed up towards the hill and was very muddy.

After about 20 mins and plenty of puddle dodging we had arrives at the woodlands on the slopes of Lewesdon hill, we turned up the hill and before long we were at the top. Lewesdon hill was also once the location of an iron age settlement, there were a lot of trees about but you could see that is had once been the location of something man made, there were not too many views from the top with the trees but it was certainly worth the walk.

Coming down the hill was just as muddy, we took a slightly different route but eventually rejoined the same path and after a short while we were back on the road. Finally the rain had stopped and we quickly made out was back along the road to towards the car park.

It was an excellent walk around the Dorset countryside even if the High point was not that high, Thanks to Chris for coming with me.
Posted by Magirob at 05:57