On my last blog post I had visited Whipsnade zoo and Dunstable downs (the highest point of Bedfordshire) with Nathan. it now it was time to continue our Journey north along the M1 until we reached Nottingham which was to be our home for 2 nights. We checked into our hotel and settled in ready for our short visit.

The next day we were not going to be visiting any highpoints, instead we had a day in Nottingham, we headed into town on the Tram. Nottingham is quite a nice place, we walked to the castle in the torrential rain and looked around that, then we headed to the caves of Nottingham, a rather cool collection of underground rooms that have been used as housing, taverns and as an air raid shelter amongst other things. Next we played crazy golf, went to the cinema and finally had some dinner in the most amazing restaurant finishing the day with a tram ride back to the hotel ready for the next day when we would tackle some of the local high points.

The first thing we wanted to do when leaving our hotel was to head north out of Nottingham and into Sherwood forest, we headed straight for the town of Edwinstowe where we visited the Sherwood forest visitors centre. After a 20 minute walk into the forest we arrived at the Major Oak, This large English oak was said to be the meeting place of Robin Hood and his band of merry men. The oak is said to be 1000 years old and weighs in at 23 tons, it is huge, it is so big and heavy that it has to be held up by various supports. After a visit to the tree we headed back to the visitors centre for a look around the shop and information centre.

It was now onto our first highpoint of the day, it was going to be a tricky one as there was some confusion as to which hill was the highest point, I have several ways of checking out my highest points, firstly there is an online database listing all of the locations, secondly I have a book written by a guy who has visited them all, anyway the online database had the highest point as Newtonwoood lane near Mansfield and the book has it as Silverhill which is also not too far away from Mansfield, the problem with these locations is that one of them is an old man made hill, the other is a dull and boring, in the end I decided to visit both.

First up was Silverhill, it sits on the site of the old Silverhill colliery which was closed in 1993, the hill here is actually a mine spoil heap and therefore man made but it is such a nice hill I think it is becoming classed as the highest point in Nottinghamshire, The walk to the top didn't take too long, we spent most of the time dodging the dog poo sadly, however when we reached the top we were greeted with a monument to the miners of the past and some amazing views. When admiring the view we noticed a huge building in the distance, after a little research we discovered it was a National trust property and as both Nathan and I are NT Members we decided a visit was the way to go so we headed back down Silverhill (or what we now affectionately call it Dog poo hill) to the car and headed off to our next destination. 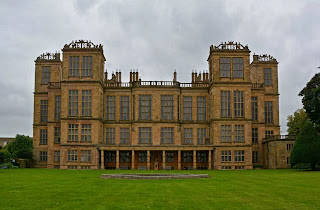 Hardwick hall is an amazing collection of buildings and gardens, the main building is Elizabethan but there are much older ruins on the same site, The property was built by the richest woman in England after Queen Elizabeth, Bess of Hardwick. We spent a good amount of time here viewing the house and seeing all the fabrics and tapestries, we later found out that the house was used as Malfoy Manor in the Harry Potter films. If you are even in the area it is well worth a look around the huge estate.

Our next point of call was the second highpoint of the day, Newtonwood lane, this was just a 20-30 minute drive away and was rather unimpressive as it is the site of a reservoir. we didn't stay here long, we decided it was time to head off home to Portsmouth as it had been a rather full few days. There was one more highpoint I had to visit on the route home however and this one could have proven difficult but I decided to make it easy and cheat a little.

The highest point of the Unitary Authority of Nottingham can be found on the M1, not next to or near the M1 but actually on the M1, this is not going to be one I could stop at and get out for a walk around so as we drove over the highpoint on the way home I got Nathan to snap a photo of me driving. After this we continued our journey home to Portsmouth after a rather nice few days away.