It was time to do another trip with Chris G from Bournemouth and he had often expressed a desire to head to the Lake district, I had 1 more high point to do it that area so we headed off up north for a nice holiday and a high point.
This trip was a bit of a last minute plan so I struggled to find a campsite at first however when I did find one it was a good one, Waterside Farm on the banks of Ullsmere was quite nice with great facilities. We arrived on the Monday and set up camp and then went for a wander along the banks of Ullsmere into the local village of Pooley Bridge, finishing the evening off with a nice meal.

Tuesday was the day to tick off the high point, we packed up our bags and headed south through the Lake district and between the mountains to the town of Coniston where we purchased some sausage rolls and snacks ready for the walk. Just up the road from Coniston we found our starting car park where we headed off for our walk. Our route today was not going to be straight up the mountain, instead I had planned on walking around the southern base of the mountain to the western side and then up and over the mountain back to the car park on the eastern edge. 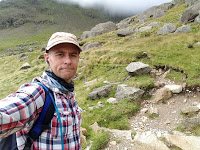 The walk started well, we had purposely chosen this day to climb as according to the weather forecast it was going to be the best day of the week however about 10 minutes into our walk the rain started and became really heavy, we were soon drenched. It turned out to be a fairly short shower and we left the current path and started to make our way along the south edge of the mountain. We passed over some rocked and started to slowly climb in height and then we came across a lake which we had to walk past. After the lake it was a very steep climb up to a ridge on the south west edge of the mountain. It was a steep climb and we heard that a lady had hurt her ankle up ahead and mountain rescue were on their way.
At the top of the ridge we turned north east and were now climbing directly towards the summit, We passed the injured lady, she had 4 people with her and we checked if they had enough supplies and all was as good as it could be with them. We continued and eventually reached the highest point of the historic county of Lancashire, The old Man of Coniston at 803 metres. Despite the wind and cloud cover we stayed at the top of the Old man for a while, we sheltered behind a stone structure and drank tea and ate our lunch. We were lucky a few times because the clouds parted and we got some amazing views down onto Coniston and across the lake.

From here we took a more direct route back down the mountain, working our way down the steep paths and amongst the old mines eventually getting back to the car park, Thankfully it had stayed dry for the rest of the walk and had actually warmed up a bit, now it was time to head back to camp.

On the Wednesday we headed to Borrowdale for a walk along a valley in search of some waterfalls and a possible swimming hole however it was FAR too cold for a dip so we paddled our feet instead, it was a beautiful sunny day and it was nice to spend some time by the river. We also visited Keswick and headed back to Pooley Bridge for a meal in one of the local pubs. On our last full day we headed to Penrith for another wander around and a bite to eat.

Sadly all good things come to an end and we had to pack up camp and make our way home. It was a lovely trip tho and thanks to Chris for coming with me. 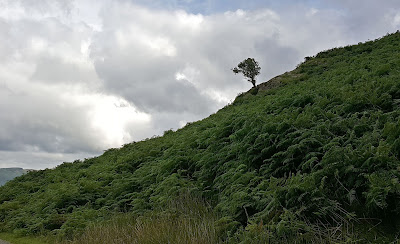 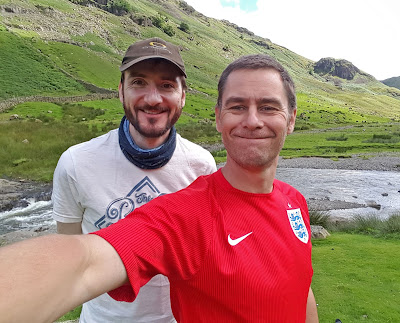