I recently had a chance to revisit Blackdown, the highest point in West Sussex but this time at night, It was around 9:30 when I left home and the drive took around an hour, I drove to a different car park to the one I was at the last time as this one was closer and easier for me to walk up Blackdown in the pitch black.

I parked the Van in a very dark car park, and got my gear ready along with some torches and headed up the zig zag path to the top, it was easy to find my way up the path but it really was dark with plenty of noises, once I was at the top I set up my camera and started taking photos.

The view was amazing, both of the sky and of the land spread out ahead of me, lots of little street lights and cars for miles around and millions or spots of light in the sky above, it is rare to see such dark skies. 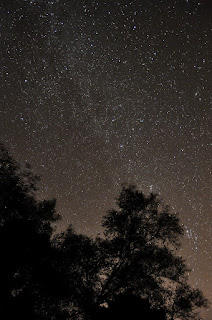 I stayed up there for around 90 mins taking various photos of the nights sky and the view ahead of me. It was very peaceful up there as the wind was pretty much non existent, just the sound of the odd animal in the bushes around me (probably a bear or something). I think this is the first time I have ever managed to capture the Milky Way in a photograph so I was very happy with the results.

Eventually I made my way back to the car and drove back home, It was another very cool outing to the highest point in West Sussex.