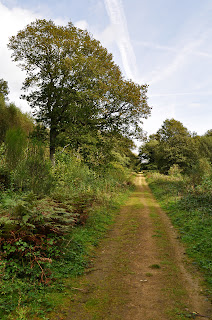 Leith Hill is around a 90 min drive for me so I left home and drove through the towns of Petersfield, Midhurst, Petworth, Billingshurst and ended up parking in a National Trust car park below the Leith Hill.

My plan today was to follow one of the National trust trails to the top of the hill so I left the car park and walked into the woods following the path. The path actually started by heading away from Leith Hill but it soon curved round and through more woodland eventually coming out onto some open land, this was my first glimpse of the view south and even at the base of Leith Hill it was pretty good, It was also in this field that I found one of Darwin's worm stones, this is a large stone placed on the ground, worms would tunnel under the stone making it slowly sink into the ground, Darwin would come to Leith Hill and measure the rate of sinking and other measurements.

Further along the path, I passed Leith Hill Place, a rather impressive house hidden behind some trees on the slopes of the hill, this was once the home of Ralph Vaughan Williams the composer who handed it over to the National Trust in 1944 and it is now privately rented.

Further up the path I crossed a road and continued along past a walled garden and eventually along to another road and the first of the steps up the hill towards the top. The steps zigzagged up the hill for a short while and shortly came out near the top of the hill. 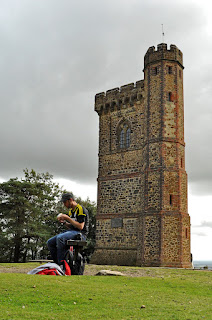 Standing on top of Leith Hill is Leith Hill Tower, an 18th century Gothic tower with panoramic views in all directions. The tower was built with the intention of raising the hill above 1000 ft and tower actually stands at a total height of 1029ft (329m).  To get to the top I had to climb 74 steps but it was worth it, to the south there were uninterrupted views of the South Downs and on a clear day you can see the English channel, then to the north lies London and I could easily make up the Shard and Wembley Stadium. Apparently on a clear day you can see up to 100 miles and 14 counties.

After climbing the tower I stopped for a cup of tea and flapjack from the little tower shop and I took some photos for a time-lapse movie. It was around this time the rain started but I managed to shelter my camera during its time-lapse and I had my new extra waterproof North Face all weather coat on so I was nice and dry.


Finally it was time to head back home so I followed the path away from the top and down towards the car park, it was quite a short walk going back which was good as the rain had started to come down heavier, once I was back at my van and in the dry the rain suddenly cleared up and I headed off home after completing my visit to Leith Hill.

I highly recommend a visit to Leith hill as the views are stunning from the top and it makes a good free day out, the tower is £1-50 to climb or free for National Trust members but as I say it is well worth a visit.