Walbury Hill lies right on the border of Berkshire and Hampshire between the towns of Hungerford and Andover. It sits in a row of hills and other feathers which include Beacon Hill (Burial place of Lord Carnarvon of Tutankhamen fame) and Watership Down (of Rabbit fame).

Walbury Hill is an easy 80 minute drive from my home along the M27, M3, A34, A303 and then the country roads through the villages of Enham Alamein, Hurstbourne Tarrant, finally up to the car park near Walbury Hill.

After parking my can it was a only short walk up to the top of Walbury hill but I had planned to walk much further, I left the car park and followed a very rough path down to a gravel track which ran along the side of a field where the high point was situated and this is where I noticed my problem, the field was full of sheep, now I have nothing against sheep but I did not know if I was allowed into the field, according to the map there was a small path to the highest point but the gate was locked and there were plenty of sheep in the way. I was not sure what to do so I decided to continue my walk.

I followed the path and eventually a sign appeared pointing across a field so I jumped over the stile and made my way along towards the next hill. While walking along the path I came across several signs to stay to the path as there were Lapwings nesting in the area, I never actually saw any.

Soon I was walking up a path towards the next hill where I managed to get some nice shots of Walbury Hill, It was along here I met the first flock of what I can only imagine was some kind of partridge, about 20-30 of them suddenly flew into the air making me jump. This happened around 10 more times during my walk, I estimate I saw several hundred of these birds, I would be walking along the path and then without warning they would erupt into the sky from just a short distance from my feet.

On top of the next hill I got some more great views of Walbury hill but it was now time to head back so I walked along another track which went down the hill and into some woodland, there were more partridges along here and a few of the fields nearby were being harvested nearby as well. Soon I came across another sign pointing back up the hill and just a few minutes up this path I came across the sheep, 20-30 of them all sat on the path ahead looking at me, there was no way to go around them and I needed to get by so I slowly worked my way through them, I felt like I was Moses parting the red sea of sheep. 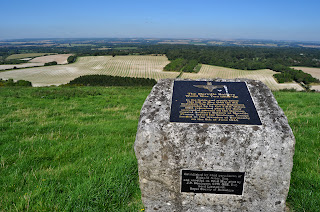 At the top of the path I was back onto the original path across the top of Walbury Hill, so I walked back towards the hill for another look at the locked gate and field of sheep, there were defiantly subtle signs telling me to keep out, a massive padlock, a practically non existent path into the field, over grown shrubs making it difficult to get to the gate, a big sign telling me "BEWARE OF THE T-REX" , OK so I lied about that last one but I decided that this was as close as I was going to get to the top so I took a few pics of the sheep and headed back to the car for some lunch.

Back at the car park I had a look around, you can see for miles up here, below me the fields and forests run off towards the horizon and in the distance sat Newbury and Hungerford. I walked up to the next hill at this point, it was called Combe Gibbet and it had a wooden structure on top of it, it looked just like a telegraph pole but I have now discovered it was a gibbet erected in 1676 for the execution of George Broomham and Dorothy Newman, They were having an affair and when Georges wife and son discovered the pair together in the area George and Dorothy murdered both his wife and son. The murder was seen by a local and the pair were hung here to deter others from committing crimes.

I sat on top of Combe Gibbet and ate my lunch watching the world go by then after a while I set off home, while driving home I passed an amazing field of flowers, it was the most amazing sight, a rich purple colour, if it was a Dulux paint colour then it would be called Amethyst Showers (its true, look it up). I stopped at the field of flowers for a while and took some more photos, it was an amazing sight to see. 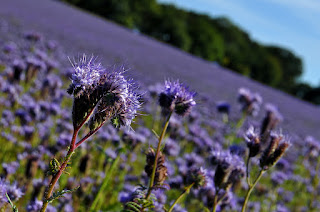 So I now come to the problem I knew I would get at some point during this blog, did I succeed? I never got to the top of the hill but that is because I couldn't get to the top. I did however get as close as I could, I guess as this hill is not too far from home I can always revisit and try again but I think I did as best I could, Its probably something I am going to have to get used to as there are plenty of other places I will not be able to get close to.