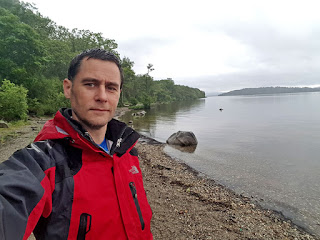 I was now on day 4 of my 12 day trip to some of the highpoints of Scotland and to give you a quick recap - I was staying at the lovely Forestry Commision run Sallochy campsite on the banks of Loch Lomond, the weather was a mixture of sunny with showers, yesterday I had visited Earl's Seat, the highest point of East Dunbartonshire and I had been visited by a mouse.

I was quite excited about my climb today as it was a pretty well known mountain, after a quick breakfast of bacon butties I drove a few miles north to a car park at Rowardennan. I parked up and got myself ready, had a quick look at the local information centre and maps, then I headed off on my climb. My plan was to do a circular route and the first part of this route climbed steadily through a small woodland and then out into the open, a mixture of steps and paths for most of this first part. I soon found myself out onto open ground and I was already at about 200 mtrs above sea level, the incline was fairly steady and a few runners had passed me on their was up the mountain, the route was actually fairly busy and I had already passed some early walkers on their way down the mountain too. It was around this point that the rain started, I was well kitted out with my waterproof jacket but it really was wet weather for the rest of the climb up. 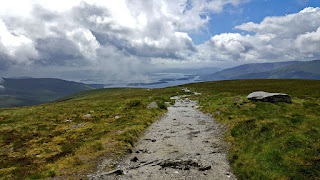 I continued on my route, the path flattened out a bit and ahead i could see that the climb would become much more of a steeper incline so I figured it would be time for a short break for snacks and a cup of tea. I hadn't passed many people for a while but then an american girl stopped for a quick chat and I was on my own again, I could see a group of people approaching from below, they were still about 15 mins away but I figured I would stay ahead of them and do the last climb to the top before they come along so I started the last steep climb up to the summit. the path zig zagged and then went along the side of the mountain eventually coming out on top of a ridge an I could now see my destination, a short walk further and I was now standing on top of Ben Lomond, at 974 metres it is the highest point of the historic county of Stirlingshire. 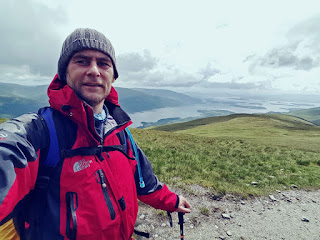 It was at this point, the moment I reached the top of Ben Lomond that the rain stopped, the skies cleared for a short while and I was rewarded with amazing panoramic views across the whole of Loch Lomond and beyond. The views were simply incredible and it was a huge wonderful reward after climbing most of the journey in the rain. I stayed for a short while and chatted to a pair of climbers, then I sat and looked at the view for a while. looking south I could see a huge band of rain approaching, it was quite a way off but it looked really heavy so I packed up my stuff an headed off, continuing my circular route back down Ben Lomond. It immediately became clear that the route was not going to be any easier than my accent, it was much steeper and was quite hard work, after about a minute of climbing down I passed 2 girls, one of them was in floods of tears because she was not sure how much further it was to climb up such a steep path, I assured her it was only a short distance and well worth it. 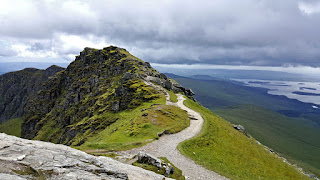 I continued down such a steep slope and eventually it flattened out and passed along the side of a summit called Ptarmigan, It was here that the rain really was starting to become torrential and it was about this time I also passed 2 americans, both dressed in their shorts an t-shirts, soaking wet, no wet weather gear in sight and no food or water to be seen. They asked how far it was to the top and I told them it was a good hour at least and they should consider turning back, I don't think they believed me and they headed off up the mountain. I continued on my downward walk and it must have been only 20 mins later when the 2 americans passed me on their way down at full almost running speed simply saying "You were right, us stupid americans", what can I say? I did warn them. 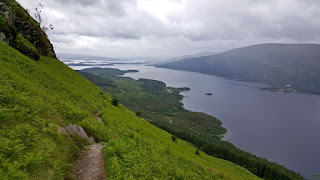 After a while I was back down at sea (or Loch) level and I had a short walk along some small roads back to the car park, I stopped to look at a lovely memorial and then I was back at the car and off back to my campsite finishing the day off with a nice meal at my tent and then a small wander along the banks of Loch Lomond. I also packed up a lot of my equipment as I was off on my travels further north to my next campsite the following day. The rain looked as if is was sticking around for the night but that didn't stop me enjoying this wonderful campsite for one last night.
Posted by Magirob at 17:59