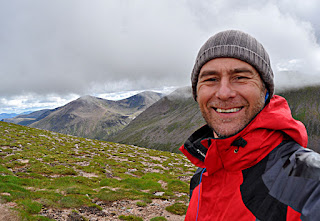 I woke up on Day 7 of my Scotland adventure to the sound of rain on my tent, It had been raining pretty much solidly for the last 3 or 4 days and it was really starting to bring me down but it was time to move campsites and head off to a different part for scotland for my next big mountain. So far on this trip I had visited Earl's Seat, Ben Lomond and the difficult Bidean nam Bian but now I was heading north west to visit another beast of a mountain. I packed up my soaking wet equipment and headed off, heaters on full, trying to dry things out in my van (to no avail) and headed north to Fort William. I stopped off in Fort William for a while to get some supplies and have a look around but then I carried on, in the rain towards my next campsite. 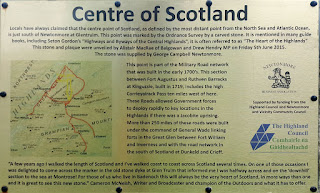 It was only about 20 mins past Fort William and I was now to the north of Ben Nevis and suddenly the sun came out, it was glorious, I pulled over an stepped out into the first warm sunshine I had seen for a while, it made me so happy after the last 4 days of solid rain. The drive from now onwards was wonderful, beautiful scenery, amazing stretches of road, I passed by the exact centre of Scotland and had a look around and then continues into the town of Aviemore where I parked up and went for a walk around in the beautiful warm sunshine. after a bite to eat I headed out of Aviemore and into the Cairngorms where I found my home for the next 2 nights, the Glenmore Campsite.


I checked in and set up tent, Now because this mountain was such a big one I had arranged to meet up with someone for the walk, Duncan lives in Aberdeen and is familiar with many of the mountains in the area and he was going to join me for the climb, I wasn't going to meet him until later in the day so I decided to use this time to explore the campsite and I was really pleased to find a laundry room. I washed and dried everything I had with me that afternoon and it was lovely to finally have some dry clothes to wear again. Duncan arrived later that day and we took a walk down to Loch Morlich for a wander along the banks and even a paddle too. 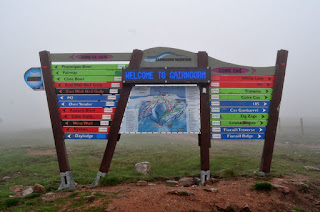 The next day I awoke and had breakfast, Duncan was going to drive us up to the car park at the Cairngorms Ski Centre this was great because it literally saved us from walking up the first 600 mtrs of mountain. The morning had started off  with a bit of cloud but now we were up the mountain the cloud had came back, we left the car park and headed past the Ski centre and then we found the path towards the first of 2 mountains we would visit today. The Ski Centre has a funicular going up to about 1100 metres, It would have been cheating to use this but the path we took eventually led us past all the Ski slopes and to the top of the funicular, We stopped here for a bite to eat. it was interesting because we were now in the clouds we could hear all the strange noises from birds around us. I did wonder if any of the noised were Ptarmigan (a Scottish bird).

From the funicular station we carried on upwards, this time a straight path to the top of Cairn Gorm, the mountain which lends its name to the range of mountains we were in. On top of Cairn Gorm there was a radio tower, it was quite thick cloud here and it all looks quite eerie. From Cairn Gorm we headed back down the slopes to pick up another path leading us in a southerly direction. We soon walked out below the clouds but our views were still restricted so we couldn't see too much, we had walked about 3 miles so far and on our right there was a steep drop with some dramatic cliffs below us. It was hard to gauge how far down the drop went as it was so cloudy around us but we continued and eventually picked up the path leading us directly towards our destination. Along this part of the walk we would often see the cloud clear and we would get some spectacular views across the Cairngorms, There were snow patches below us and then we would catch glimpses of other mountains in the area, it really was quite beautiful. 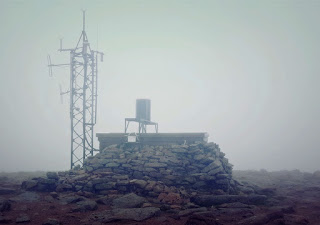 We stopped for some lunch near a small pool and actually caught a glimpse of a Ptarmigan, there was a tent near by but no sign of the occupants, after lunch the path changed and became more rocky for a while, rather than follow a path we were following some handy piles of rocks marking the route, the path soon came back and then we started our final ascent up to our destination. The cloud cover soon came back and we passed the odd walker or 2 as we approached the high point. Eventually after 6 miles of walking we reached the top of Ben Macdui, at 1309 metres it is the highest point of Aberdeenshire and Moray. The county border runs right across the top of Ben Macdui so I managed to tick off 2 counties without even moving, it is also the second highest mountain in the UK.

We didn't stay too long here, it was cloudy and with no views there was nothing to look at so we had a bite to eat and took some photos then headed off back the way we came. We passed a fairly big group of other walkers heading to the high point, then back down out of the cloud cover, over the rocky paths, past the tent and then we turned off onto a different path leading us back to the car a different route. It was along here that the clouds started to clear more and the sun came out giving us spectacular views over the surrounding mountains and valleys. The walk back to the car park from here was really stunning, to the north we could see Aviemore and beyond, to the south were some incredible cliffs, some of which we walked along earlier in the day.

Back at the campsite I had a bit of a rest and shower and then I headed into Aviemore with Duncan to grab some food in one of the local restaurants, an Australian themed place called Roo's Leep. then it was off back to the campsite for a well earned sleep. After the rain of the last 4 days Ben Macdui turned out to be a really wonderful climb and it was great to have the company of Duncan on the walk too. 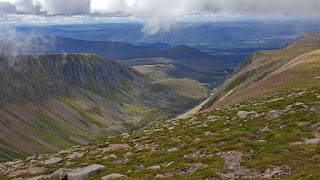 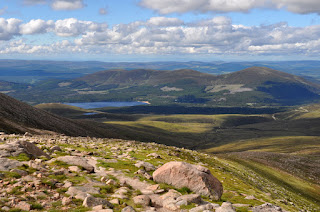