Just to the north of Bodmin in the north east of Cornwall lies Bodmin Moor, an 80 sq mile moorland and home to the highest point in Cornwall, Brown Willy. 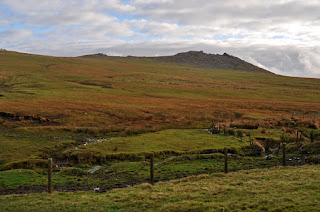 I have been to Cornwall many many times and I have worked out that I have driven through Bodmin Moor along the A30 around 80 times however I have never stopped off on the moor for an explore, it was time to change this and I left home at 10:30am for the 188 mile drive to the car park near Camelford.

The journey was uneventful having done most of it many times before, driving along the M27, A31 past Ringwood, A35 past Dorchester, Honiton then onto the M5 for a short time and then the A30 past Okehampton. Just after Launceston I turned off the A30 onto a smaller road and past the village of Pipers Pool and Davidstow, finally turning left just before Camelford towards the car park. I arrived at the car park around 2:30pm and prepared for my walk.

I left the car park and headed south through a gate, across a field and through another gate where I crossed a bridge over a river and headed onto the Bodmin Moor, I could see several hills rising up ahead of me and from this point I could not see Brown Willy. After a very short time It had become apparent that the ground was very wet, my shoes were already damp and mud was splattered up my jeans but this was not a problem, I dodged the puddles where I could. 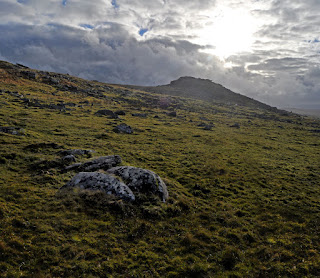 Up until now I had not seen Brown Willy and as I reached the top of Little Rough Tor I saw it ahead, an unmistakable peak beyond a shallow valley to the south of me, I took a few photos and continued west along the ridge to the top of the next hill. Rough Tor is an impressive sight, many large boulders protrude from the top of the hill, they look like they have been scattered there by giants, some balancing on top of others as if they are about to fall off and then to the west a hugh granite wall stands as if ready to hold back an approaching army.
There is a memorial on top of the Tor for the 43rd Memorial Division who fought in WWII, the Scouts also have recently visited to leave a poppy wreath. I stayed around for a few minutes and then decided to move on to Brown Willy, I headed south again and worked my way through and over the boulders which are scattered all over the slopes of Rough Tor.

The boulders and rocks soon disappeared as I walked through the valley between Rough Tor and Brown Willy, it was around this time during my walk I noticed how alone I was, I had not seen anyone since the car park and could see no one around, just a few horses, cows and sheep in the distance, it was quite windy but down in the valley I could not feel the full force of the wind and it was actually very quiet, a feeling of remoteness was upon me, I couldn't see any signs of civilisation, just the occasional barb wire fence. 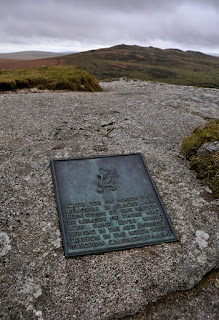 At the bottom of the valley I approached a river with a bridge and a gate, up until now I had been on National Trust land but Brown Willy is on open moorland and there were paths for me to follow from now on, I stopped to photograph the little bridge over the river and then crossed it to the gate, it was pretty muddy as I got near the gate and I carefully stepped on solid ground towards the gate but just as I reached it my foot sunk into a mud hole right up past my ankle, ewwwww, the water poured into my shoe and I was left with a horrible soggy foot, oh well, never mind, at least I didn't have to worry about it getting any wetter.

Once through the gate I started the climb up Brown Willy its not a steep climb, in fact its a very easy climb so it was not long until I was at the second gate and once through this it was even muddier for a short distance, further towards the top the path became strewn with rocks and boulders and the top was in sight. 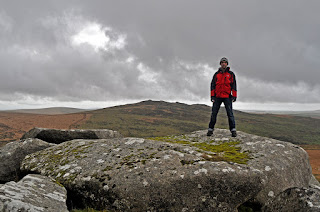 Further up the path I walked and up the last few feet to the top of Brown Willy where I found a trig point and a pile of rocks marking the highest point, I had made it to the top, The views are magnificent, to the south and east are the rolling moors stretching into the distance and in the north-west lies the Atlantic Ocean, they are probably some of the best views I have seen on any of my highpoint climbs so I was very happy.